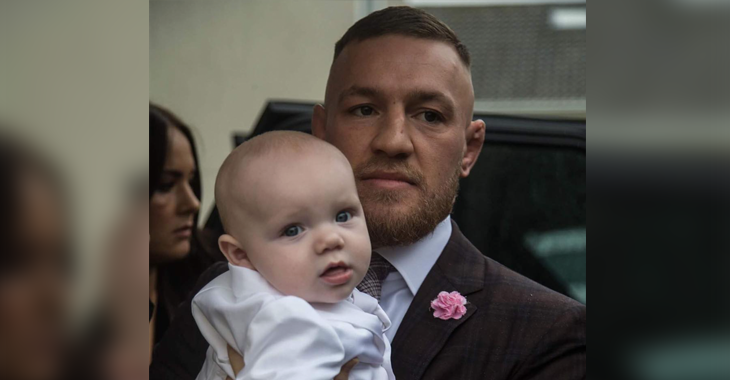 Current UFC undisputed lightweight champion Conor McGregor earned the biggest payday of his career in his last competition. McGregor made a crossover into the sport of boxing where he took on Floyd Mayweather for his professional boxing debut. McGregor earned a guaranteed $30 million purse for the fight that he lost in the 10th round by TKO and likely earned somewhere near $100 million with his earnings from the pay-per-view buys, sponsorships, and endorsements from the bout.

Since his big money payday, McGregor has been living it up on vacation with no fight announced and the parties have not stopped.

On Monday, “The Notorious” posted photos from his son’s christening. Conor Jr. is seen dressed in an all white suit being carried around by his parents where there was a huge buildout for the life event. In the photos McGregor posted to social media (scroll through photos in post below), the McGregor family is seen riding on a ferris wheel in the carnival themed party and checking out animals from a petting zoo. This entire “Mac land” was all set up at the Luttrellstown Castle near Dublin, Ireland.

While the parties continue for the McGregor clan, UFC President Dana White just mentioned that the next fight for “The Notorious” will likely be against UFC interim lightweight champion Tony Ferguson in Las Vegas. The bout has not been officially announced and a date was not mentioned but it is the fight that makes the most sense to unify the UFC lightweight titles.