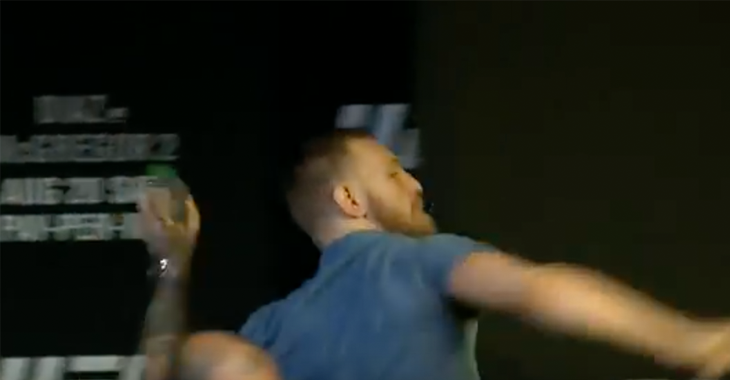 Back in August, in the buildup to UFC 202, Irish superstar Conor McGregor and his arch rival Nate Diaz got into a heated press conference confrontation, pelting each other with water bottles, Monster Energy cans, and other improvised projectiles. This chaotic moment did not go over well with the fight’s sanctioning body, the Nevada State Athletic Commission (NSAC).

Several months after this hectic ordeal, McGregor was handed a fairly significant punishment by the NSAC – a $75,000 fine, and 50 hours of community service, to be exact. Though this sum seems like it’s probably a drop in the bucket for the ultra-successful Irishman, he and his team were not satisfied with it, and pursued a re-hearing with the NSAC.

That re-hearing has finally occurred, and just as McGregor hoped, his punishment has been reduced. According to Shaun Al-Shatti of MMAFighting.com, McGregor will now only have to pay $25,000 and complete 25 hour of community service. Whether this diminished sentence will be enough to convince McGregor to fight in Las Vegas again remains to be seen.

When we last saw McGregor in action, he scored a second-round knockout over Eddie Alvarez to win the UFC lightweight title. Because he still held the UFC featherweight crown at the time, this made him the first fighter in UFC history to hold titles in two weight classes simultaneously.

Prior to this history-making defeat of Alvarez, McGregor went 1-1 in two welterweight battles with Diaz, losing the first by submission and winning the second by decision.

At the moment, the Irish star is transfixed on the possibility of a boxing mega fight with recently un-retired star Floyd Mayweather. Though this fight long looked like an impossibility, it’s looking more and more likely by the day.

Do you think the NSAC is fairly punishing Conor McGregor? Sound off PENN Nation!