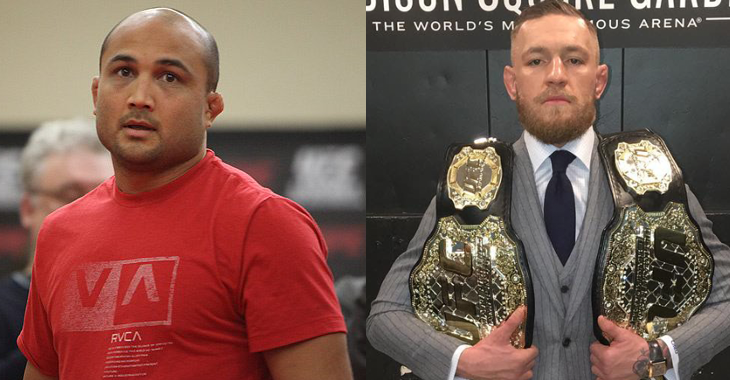 Conor McGregor is on the verge of making UFC history!

If “Mystic Mac” can somehow hold on to his 155-pound title for another 310 days he will become the longest reigning UFC lightweight champion in the promotions history.

That record of longest reigning lightweight champion in promotional history is currently held by UFC Hall of Famer BJ Penn, who carried the UFC’s coveted 155-pound strap for 812 days during his legendary title run.

While both Conor McGregor and BJ Penn have accomplished some incredible feats during their time in mixed martial arts, BJPENN.com’s Chris Taylor explains why there is currently no argument when discussing who is the greatest lightweight champion in UFC history.

“The Prodigy” earned the UFC lightweight title in January of 2008 when he bloodied up Joe Stevenson on route to a second-round submission victory at UFC 80 in Newcastle. Penn would then square off with former lightweight title holder Sean Sherk at UFC 84 in May of 2008. “The Muscle Shark” had been stripped of the UFC lightweight title months earlier, this after he tested positive for performance enhancing drugs following his win over Hermes Franca at UFC 73.

“Baby J” would go on to defeat Sean Sherk via third-round knockout (flying knee) in the headliner of UFC 84, which prompted the Hawaiian to callout then UFC welterweight champion Georges St-Pierre for a super-fight.

“GSP” would accept Penn’s challenge and the two UFC legends would eventually throw down in the main event of UFC 94 with St-Pierre’s welterweight title on the line.

Unfortunately for fans of the Hawaiian, Penn went on to suffer a fourth-round TKO loss to “GSP” at the high profile event which took place January 31 in 2009.

BJ Penn would return to lightweight at UFC 101 in August of 2009 where he took on surging division contender Kenny Florian. “The Prodigy” would end up submitting “Ken-Flo” in the fourth-round of their event headliner in Philadelphia and picked up a “submission of the night” bonus for his efforts.

Penn would go on to defend his lightweight title on one more occasion defeating Diego Sanchez via TKO in December of 2009 at UFC 107, this before eventually surrendering his belt to Frankie Edgar via decision at UFC 112 in Abu Dhabi.

BJ’s impressive lightweight title run is still considered to be the very best in UFC history. It consisted of three successful title defenses, with all three wins coming by form of stoppage, and one super-fight loss to fellow legend Georges St-Pierre.

As for Conor McGregor, “Mystic Mac” captured the UFC’s coveted lightweight strap in November of 2016, this after scoring a second-round knockout of Eddie Alvarez in the main event of UFC 205. However, since that memorable evening at Madison Square Garden where McGregor became the “double champ”, the brash Irish superstar has yet to defend his title.

It has now been 503 days since McGregor last stepped foot inside the octagon, which has forced the promotion to create an interim lightweight title that is currently worn by Tony Ferguson.

According to UFC President Dana White, Conor McGregor will be stripped of his 155-pound title as soon as the first strike is thrown between Tony and Khabib at UFC 223.

Whether or not the brash UFC boss will follow through on that statement (striping McGregor) remains to be seen.

One thing is for sure, despite holding the UFC lightweight for over 500 days, Conor McGregor’s accomplishments as UFC lightweight champion pale in comparison to that of BJ Penn.

As a matter of fact, all 28 champions in the UFC with title runs lasting 500+ days or more have made at least one title defense (via Mike Bohn).

Conor McGregor won the UFC lightweight title exactly 500 days ago. Of the 28 champions in UFC history with title reigns of 500+ days, all of them had at least one title defense, and 26 had at least two.

Despite closing in on BJ Penn’s record of longest reigning lightweight champion in UFC history, Conor McGregor still has a ton of work to do before his run can be compared to that of “The Prodigy”.