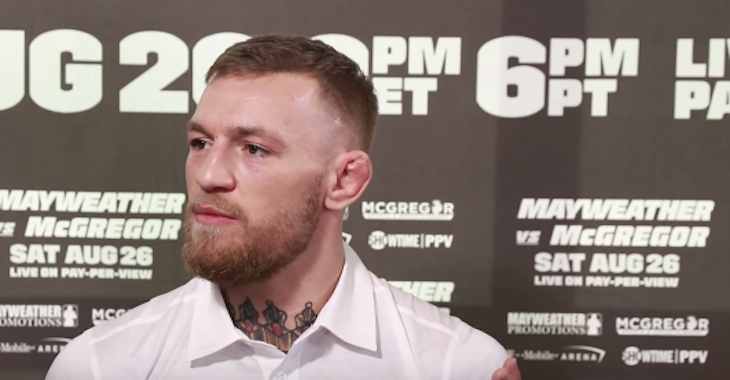 On August 26, UFC lightweight champion Conor McGregor will step into the boxing ring with undefeated pugilist Floyd Mayweather in a contest being hailed as “the biggest fight in combat sports history.” In the eyes of many boxing purists, though, it’s more of a freak show. In their eyes, the real super fight occurs on September 16, when Kazakh juggernaut Gennady Golovkin will step through the ropes to battle Mexican destroyer Saul ‘Canelo’ Alvarez.

While this latter fight is the one that’s got diehard boxing fans most excited, however, it doesn’t really do much for McGregor. In fact, the Irish star finds both Canelo and ‘GGG’ pretty underwhelming.

“I’m not really too much of a fan of either of those,” McGregor recently told reporters (h/t MMAMania). “I think Canelo’s a little bit stuck, a little bit flat on his feet. When I watch footage of him I just see him getting peppered — he has no feet under him.”

From there, the Irishman sounded off on Golovkin, who’s been sharpening his tools in Colorado.

“Golovkin, I think, came into camp for this preparation badly out of shape,” he said. “I’m looking at him badly out of shape up in Big Bear and I just see a drained individual. So, although they’re supposedly up there [among the best boxers in the world] as well, I don’t really think they are.”

Canelo will enter his fight with Golovkin with a fantastic overall record of 49-1-1. His lone loss came against Mayweather, when he was just 23 years old. In his last fight, he dominated Julio César Chávez Jr. to a unanimous decision. This win was preceded by thunderous knockouts of Liam Smith and Amir Khan.

Golovkin, meanwhile, is undefeated at 39-0. In his last fight, he looked mildly human for perhaps the first time ever, battling Daniel Jacobs to a unanimous win. This decision triumph marked the end of a 23-fight knockout streak.

What do you think of these comments from Conor McGregor?