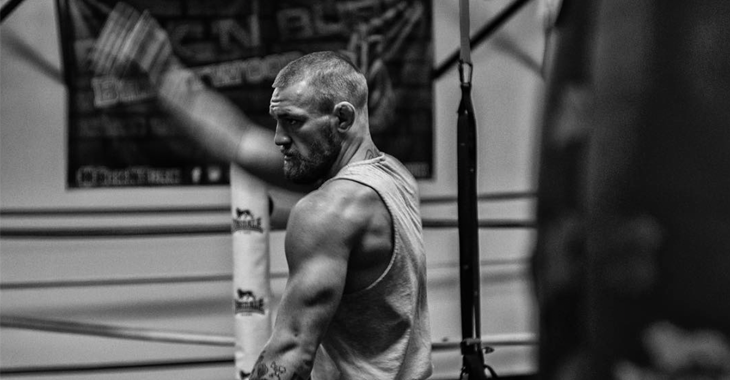 There is currently no bigger story in the world of combat sports than that of UFC lightweight champ Conor McGregor‘s possible boxing mega fight with undefeated great Floyd Mayweather Jr. This epic, sport versus sport showdown dominates headlines, and continues to enthral the combat sports community as new details continue to emerge.

This fight, of course, is not yet a done deal. Though we know both McGregor and Mayweather are keen to make it happen, there are some serious bureaucratic and financial hurdles that must be cleared before it can all be made official.

Apparently, however, this is not stopping McGregor from training like a mad man for a potential fight with the boxing great.

In a recent interview with Fox Sports Australia, McGregor’s head coach John Kavanagh confirmed that McGregor’s focus in training has shifted from MMA to getting ready for a boxing match with Mayweather.

“In my mind, [the fight is] on,” Kavanagh said “That’s the mentality we’re in. Like you said, there’s a lot of fingers in the pie on this one. There’s different promotions, different organizations, different commissions that are involved but as far as I’m concerned, I really believe it’s going to happen this year. That’s the mindset I have.”

“Let the people in the suits worry about the paperwork. We’re training for it.”

Kavanagh then elaborated on how exactly McGregor’s training has evolved for this possible fight.

“Boxing is one of the 10 skills you need for mixed martial arts,” he said. “But now we’re only doing boxing so we can drop wrestling and jiu-jitsu and Thai boxing, we can just focus on the boxing.”

“So of course we’re getting ready to fight arguably one of the best defensive boxers of all time, but the training will become simplified cause we only have to do boxing, so it’s a new challenge I’m excited about.”

Do you think Conor McGregor can shock the world by defeating Floyd Mayweather at his own game? Sound off, PENN Nation