UFC superstar Conor McGregor put on a brilliant performance in his historic fight against Eddie Alvarez at UFC 205 in November.

With his dominating win, “The Notorious” became the first fighter to ever hold two UFC division titles at the same time, being the champion of the UFC’s 145-pound featherweight and 155-pound lightweight divisions.

Many were expecting a competitive fight between McGregor and Alvarez but the Irishman showed early on his superior striking, timing, and accuracy as he dropped Alvarez three times in the first round.

At one point during the fight, McGregor put his hands behind his back, which many thought was a display of showboating from the brash Irish star. However, McGregor’s long-time coach John Kavanagh explained on last week’s episode of The MMA Hour that it was a habit McGregor picked up in training for his fight due to a nagging injury on his right-hand knuckle.

“He found that if he actually held his right hand behind his back, it kind of reminded him not to throw it as much,” Kavanagh said (transcribed by Marc Raimondi of MMA Fighting). “That’s why he started reaching back and actually grabbing his hand.

“It was almost like a mental note: take care of the right hand.”

Although Kavanagh explained that the action was a reminder for McGregor to be mindful of his right hand, the coach behind the UFC’s current biggest draw did admit there were some additional motives with the hands behind the back.

“If you put your hands down, an untrained person will try to swing at your head,” Kavanagh said. “It’s a base instinct — I want to punch the guy in the head.”

McGregor did not hold back from hitting Alvarez with his right hand at UFC 205 and he used incredibly accurate combinations to hurt Alvarez throughout the fight, which ultimately led to McGregor putting the then-lightweight champion away in the second round of their contest.

Kavanagh stated that he feels McGregor has a “very high level of striking” that most others in the UFC aren’t quite yet able to catch up with yet at this stage. 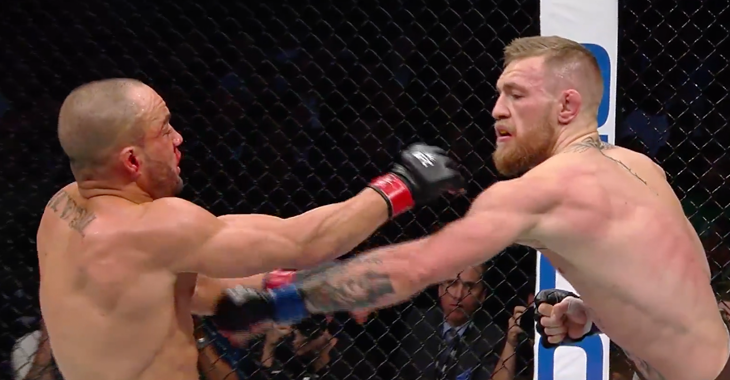 What did you first think Conor McGregor was trying to do when he put his hands behind his back against Eddie Alvarez at UFC 205? Give us your thoughts in the comment section!