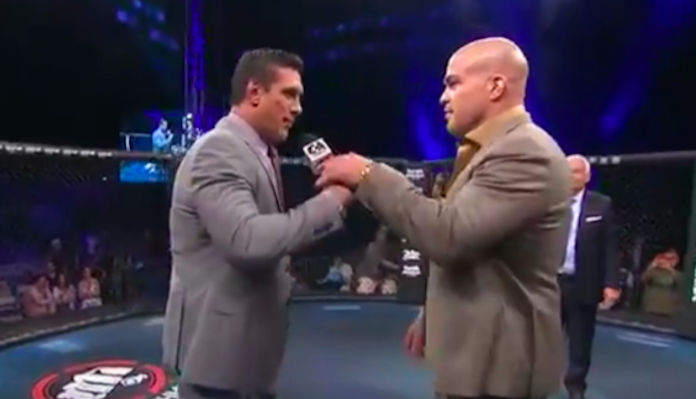 Tito Ortiz and Alberto Del Rio do not like each other and that was made apparent at today’s weigh-ins.

On Dec. 7, Ortiz will be making his Combate Americas debut when he battles Del Rio, who also serves as the promotion’s president. The two have gone back-and-forth in interviews trash-talking each other. So, when they came face-to-face at the weigh-ins they got into it as they pushed each other several times and had to be separated.

Alberto El Patron and Tito Ortiz get into it before their upcoming fight. pic.twitter.com/UjQHb8fvWu

Tito Ortiz last fought back in November of 2018 in Golden Boy Promotions first and only MMA event. There, he knocked out Chuck Liddell in the trilogy bout between the two. The win extended his streak to two after he submitted Chael Sonnen in his final Bellator scrap.

The former UFC light heavyweight champion is 4-1 in his last fives fights. There, he also beat Alexander Shlemenko and Stephan Bonner. In his career, he has notable wins over the likes of Forrest Griffin, Vitor Belfort, Ryan Bader, Wanderlei Silva, and Ken Shamrock three times.

Alberto Del Rio, meanwhile, is the former WWE heavyweight champion. However, the 42-year-old does have MMA experience as he is 9-5. He also fought in Pride going 0-2 including a knockout loss to Mirko Cro Cop. But, he has not competed in MMA back since 2010 when he was knocked out by Yamamoto Hanshi.

It will also be the first of Tito Ortiz’s multi-fight contract with Combate Americas and the card serves as the promotions first-time holding a pay-per-view.

What do you make of this scuffle between Tito Ortiz and Alberto Del Rio? And, who do you think will win on Saturday? Sound off in the comment section, PENN Nation!