The Octagon remains in Nevada for tonight’s UFC 269 event, a fourteen-bout fight card headlined by Charles Oliveira vs. Dustin Poirier.

Oliveira (31-8 MMA) captured the promotions vacant 155lbs title back in May, when he stopped Michael Chandler with a TKO in the second round. That win marked ‘Do Bronx’ ninth in a row, with eight of those respective victories coming by finish. 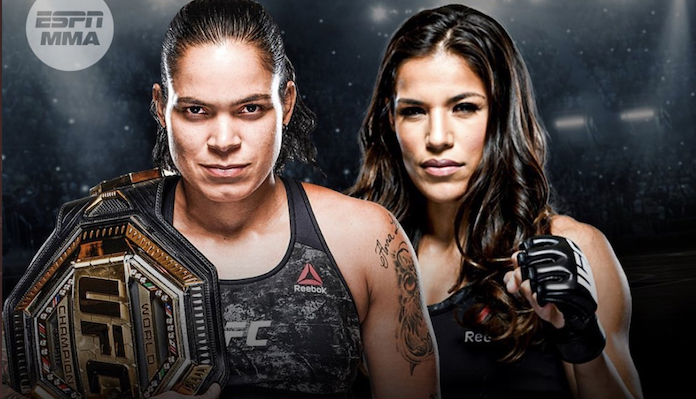 As for ‘champ champ’ Amanda Nunes (21-4 MMA), the perennial GOAT of MMA last competed in March, where she successfully defended her featherweight strap with a first round submission victory over Megan Anderson. ‘The Lioness’ has not tasted defeat since September of 2014, when she was stopped by elbows and punches from Cat Zingano.

Charles Oliveira vs. Dustin Poirier – Oliveira def. Poirier via submission in Round 3 (Video)

Amanda Nunes vs. Julianna Pena – Pena def. Nunes via submission in Round 2 (Video)

Cody Garbrandt vs. Kai Kara-France – Kara France def. Garbrandt via KO at 3:51 of Round 1 (Video)

Sean O’Malley vs. Raulian Paiva – O’Malley def. Paiva via TKO in Round 1 (Video)

BAM BAM DOES IT AGAIN 💣

Eryk Anders vs. Andre Muniz – Muniz def. Anders via submission (armbar) at 3:13 of Round 1

Going OFF!!! @TonyKelleyMMA just came in to get it done 😤 #UFC269 pic.twitter.com/IzMfelFGVQ

Priscila Cachoeira vs. Gillian Robertson – Robertson def. Cachoeira via submission (rear-naked choke) at 4:59 of Round 1

Who are you picking to win tonight’s UFC 269 title fights? Share your predictions in the comment section PENN Nation!

This article appeared first on BJPENN.COM
Previous articleJon Anik weighs in on the rift between fellow UFC commentators Daniel Cormier and Dominick Cruz
Next articleTony Kelley explains why he drove from Louisiana to Las Vegas for UFC 269: “I’m just different, all you sheep just conform and stay quiet”
© Newspaper WordPress Theme by TagDiv