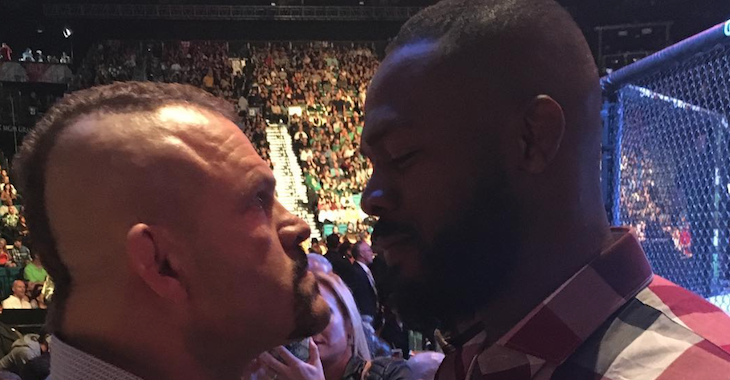 It’s no secret that pound for pound king Jon Jones and UFC Hall of Famer Chuck Liddell have had beef over the course of the past few months. While the pair initially took verbal jabs at one another over social media, they squashed their beef at UFC 196.

To show everyone that they were over their beef, the pair did a staredown picture, except UFC President Dana White wasn’t made aware of the situation until her turned around and thought the two were about to come to blows.

Liddell talked about the situation on Inside MMA:

“The funny part about the whole thing, when we were having that talk, when he’s talking to me. He goes ‘Okay we’re cool? Then can we do a face-off picture?’ So we start doing the face-off picture, Dana turns around and goes, ‘Oh no no no no!’ He thinks we’re going to fight!

Fortunately for UFC President Dana White, the beef between these two is over and he doesn’t have to worry about the two brawling any time soon!