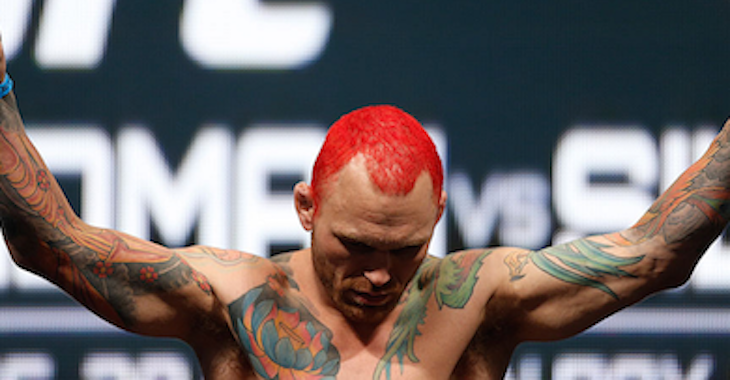 UFC veteran Chris Leben was just about to make a return to MMA with a new contract with Bellator MMA. In the process of getting ready to return to competition, bad news about his physical health hit the knockout specialist as he went through the process of pre-fight medical exams.

The 35-year-old veteran appeared on The Luke Thomas Show on SiriusXM to talk about his condition (transcribed by MMA Fighting):

What did the doctors find was wrong with your heart?

Basically, I was doing my pre-fight stuff. I failed the EKG, so I took four more, continued to fail as my left ventricle was putting out too much electricity. They did a cardio-ecogram where they went in and actually look. They do an ultrasound of your heart while it’s pumping.

Unfortunately, my left ventricle is oversized, misshapen and not pumping correctly. It’s pumping at 18 percent, which I’m told is not a good thing.

Have you been feeling symptoms of this before the exam?

You know, that’s the crazy thing. I’ve never felt better. That was the big thing about this comeback was I’m off the Suboxone, I’m off the medications the doctors have been giving me. I’m 100 percent drug, alcohol free and eating healthy. I’m in the gym, I’m beating up all the 20-year-olds. I’m a little leaner than I used to be and I’m back to eating meat again, but that’s great for fighting.

I was doing awesome. I would come in in the morning, I’d do jiu-jitsu with Baret Yoshida, then I’d come and do my kickboxing with Vince, then I’d do go over with Andy and do my strength and conditioning, so three hours in the morning and I was back for team practice at night.

So, what are the doctors saying would happen if you kept fighting?

The doctors were like, ‘You don’t have a problem walking up these stairs?’ That’s the way they’re looking at it. They’re blown away that I’m performing the way that I am, that I can do the things I can do with my heart, because it’s just not pumping the blood and apparently that’s an important thing. It’s definitely extremely frustration.

What are they worried about, specifically? Heart attack, heart failure?

Stroke, heart attack, yeah. Heart failure is actually the condition. Basically, my heart is failing. It’s got dead tissue on it, it’s oversized. There’s plethora of reasons this can happen. It happens more commonly to athletes.

They’re not saying it’s linked to alcohol or anything like that, but my guess is I train my ass off when I’m in the gym. I never miss a day in the gym, but for a long time, I also took advantage of the night life as well. So, I’m kinda burning the candle from both ends for years. I think my heart just couldn’t take it.