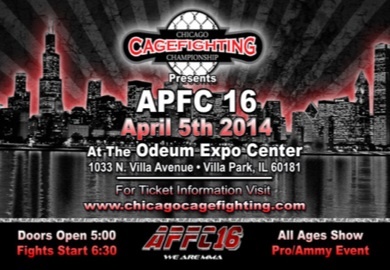 Damarques Johnson has been on a 4 fight skid since his last win over Clay Harvison in 2011 at UFC on Fox: Velasquez vs. Dos Santos. He will be looking to snap that losing streak at APFC 16.

His opponent, Dan Stittgen is also on a losing streak, losing 3 in a row, including 2 failed attempts in the Octagon against Kickboxing world champion Stephen Thompson and Marcelo Guimaraes.

Jeremy Horn has competed for many MMA promotions throughout his 115 career fights, including the UFC, WEC, Pride FC, and Bellator, among many others. He will be riding a 2-fight win streak into his fight against Dan McGlasson.

Several high profile UFC fighters will be in attendance including Eddie Wineland, as well as Chicago’s own Ricardo Lamas and Matt Hughes. Also in attendance will be the Chicago Bulls’ announcer as well as 3 time former championship team member Stacey King. The event will benefit Children’s Oncology Services.

Tickets for this event are being sold online for $25 and $35 a piece. Tickets can also be purchased the day of the event, however, ticket prices will be higher at the door. You can purchase tickets online here