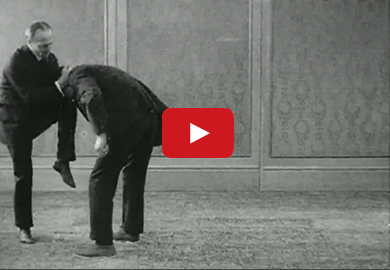 In the video above, we see Viking Cronholm; A man who introduced the Japanese Martial Art of Jiu Jitsu to Sweden, in the early 20th century. The video, taken in Sweden, demonstrates a few simple techniques used in the art of self defense.

Cronholm boxed in his spare time and is said to have won a Championship title while competing in match-ups in Portland, from 1895 – 1900. At 30 years young, he and his wife moved to Cape Town, South Africa, where he learned jiu jitsu from both English and Japanese instructors.  It is speculated that the jujitsu he learned was the style that the founder of judo, Kano Jigoro, taught.