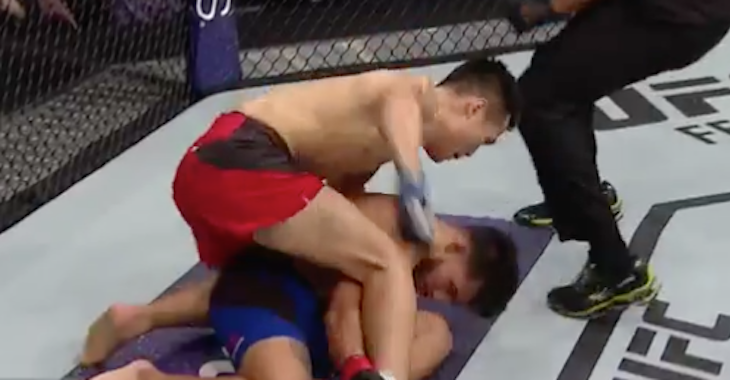 Last night, in the main event of the UFC’s latest trip to Houston, Texas, featherweight fan favorite Chan Sung Jung – better known as the Korean Zombie – levelled Dennis Bermudez with a first-round uppercut. It was a gorgeously executed punch, and a wonderful addition to his already lengthy highlight reel.

The real significance of this win, of course, is that it marked the Korean Zombie’s return to the cage after a long hiatus from the sport, during which he partook in the two years of mandatory military service required of all South Korean men.

In the wake of this thunderous knockout win the Korean Zombie spoke with MMAJunkie.com to discuss his long break from competition, and how it feels to have returned in such impressive fashion.

“I’m human too, so there were times when I thought, can I keep up with the game, can I keep developing my techniques? Now, I feel like I’m about to cry,” the ever exciting featherweight explained.

“I’ve changed the way I think about the game of fighting, so I was actually expecting and planning for a five-round decision,” he continued said. “But I thought if I can catch the knockout or submission, even better.”

“It feels really, really good, and I want to thank all the people that stood by me during that time off.”

The undead hero then went on to explain that, despite his long layoff, his goal of becoming a UFC champion hasn’t changed.

“My goal is always to be the champion, and I think this fight has put me back in the game.”

At 29, it would seem that the Korean Zombie still has plenty of time to realize his championship goals. Who would you like to see him fight next? Sound off in the comments section, PENN Nation!