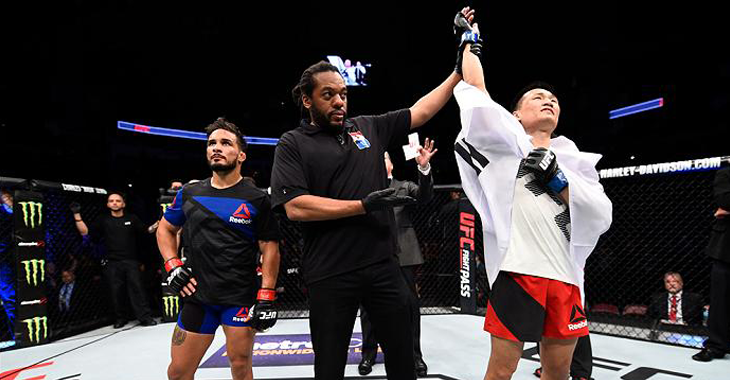 “The Korean Zombie” Chan Sung Jung made a successful return to the octagon earlier this month in Houston, scoring a first-round knockout victory over Dennis Bermudez in the main event of UFC Fight Night 104.

Jung caught Bermudez with a devastating uppercut midway through the opening round that sent Dennis crashing to the canvas which prompted referee Herb Dean to quickly call a stop to the fight. Following his big victory at UFC Fight Night 104, which boosted “TKZ” in to the featherweight divisions top ten, Chan Sung Jung took the time to speak with BJPENN.com’s Chris Taylor.

During the interview, Chris asked “The Korean Zombie” why he had called out BJ Penn for his return fight. Jung explained:

“I have the utmost respect for BJ. I always have and that’s why I had said that I wanted to fight him for my comeback fight. I know some people saw that as a slight, but it was the total opposite.”

Taylor asked Jung if he believes BJ should continue fighting after his most recent loss to Yair Rodriguez.

“BJ is a great fighter. That said, no one can stop time. I think that it might be better for his legacy for him to retire now, but as a competitor and a fighter, I would understand if he continues on with his career.”

Chan Sung Jung was hoping to score a fight with Max Holloway following his stunning knockout victory over Bermudez. However, “Blessed” has since been booked for a featherweight title unification bout with Jose Aldo which will take place at UFC 212 in Brazil.

With Cub Swanson booked to fight Artem Lobov, and Frankie Edgar and Ricardo Lamas agreeing to fight, it would seem that Yair Rodriguez would be the most logical choice for Jung’s next fight.

Who would you like to see “The Korean Zombie” fight next. Sound off PENN Nation!