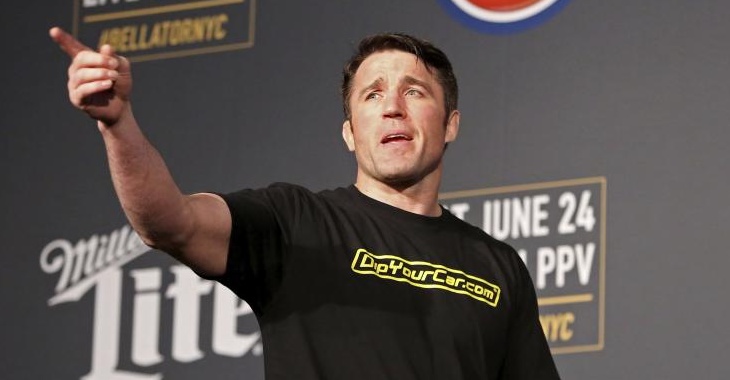 Earlier this week rapper/actor 50 Cent (Curtis Jackson) sent the mixed martial arts community in to a buzz after he teased a potential fight between himself and former UFC light heavyweight champion Quinton “Rampage” Jackson on Instagram.

Most fight fans laughed off the Fifty’s social media post assuming it to be a simple publicicty stunt.

However, shortly after his now infamous Instagram post regarding a potential scrap with “Rampage”, 50 Cent shared a photo of what appeared to be a business meeting with Bellator MMA president Scott Coker.

50 Cent, also known as Curtis Jackson, is no stranger to combat sports. The now 42-year-old is a former Golden Gloves boxing champion and was also instrumental in helping form “The Money Team” with Floyd Mayweather.

While 50 Cent’s future in mixed martial arts still remains unclear at this time, that hasn’t stopped the famed rapper from starting beef with yet another of the sports super stars.

“50” took to Twitter where he posted the following photo of himself alongside former UFC kingpin Jon Jones and multiple time promotional title challenger Chael Sonnen which included a jab at the “American Gangster”.

Look at this fool trying to be cool, I️ like Jon Bones Jones 👀look at your punk ass trying to fit in. Get the fuck outta here. LOL pic.twitter.com/4Q2H5dBbJ9

“Look at this fool trying to be cool, I like Jon Bones Jones look at your punk ass trying to fit in. Get the fuck outta here. LOL” – 50 Cent

Me and some tall dude trying to get Filthy Scent on the Cyclone roller-coaster & Coney Island.
He was
TREMBLIN'

“Me and some tall dude trying to get Filthy Scent on the Cyclone roller-coaster & Coney Island.
He was TREMBLIN’
MMA?
BWAHAHAHAHA!!!!” – Chael Sonnen

Chael Sonnen defeated Quinton Jackson by way of decision earlier this year to advance to the semifinals of the Bellator Heavyweight Grand Prix tournament where he will now face MMA Legend Fedor Emelianenko.

Do you think we will see 50 Cent ever enter the Bellator MMA cage as a competitor? Sound off PENN Nation!