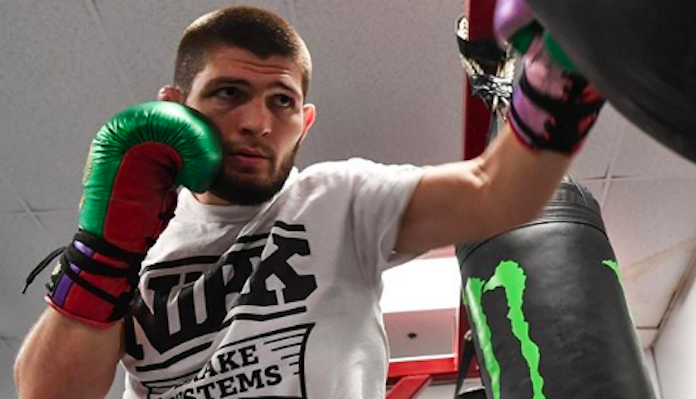 Khabib Nurmagomedov has been the hot topic of discussion since his big title defense at UFC 229. So much so that he’s even acquired Floyd Mayweather’s attention.

The likelihood of this completely hypothetical and fantastical matchup happening is slim to none…but we kind of felt that way with Mayweather vs Conor McGregor didn’t we?

Either way, the brief back and forths between the two has, of course, created discussion among the MMA community as to what would happen if the UFC lightweight champion Nurmagomedov were to step into the squared circle.

Former middleweight champion Michael ‘The Count’ Bisping recently shared his thoughts on the fantasy bout his podcast Believe You Me. While he doesn’t think that Nurmagomedov would beat Mayweather, he thinks that he would be able to achieve something that McGregor could not.

“I swear to god, Khabib would go the distance with Mayweather. He’d go the distance with Mayweather. I’m not saying Khabib is a better boxer than McGregor, he’s not a better striker, he’s not as elusive, he’s not as slick but he’s got a f*cking chin and he’s got cardio for days. And Mayweather at his age, he was never a knockout guy even though he did have some knockouts. He knocked out England’s very own Ricky Hatton in devastating fashion but I don’t see it.

Before Nurmagomedov can get back to business with his fighting career, he must first find out what his punishment will be from the Nevada State Athletic Commission for his post-fight antics at UFC 229. His hearing is set to take place next Wednesday on October 24.