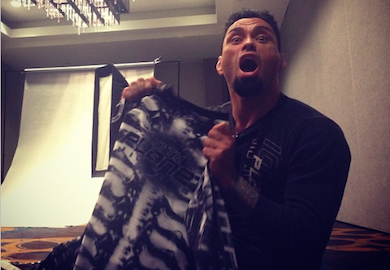 “I always wear gi pants when I train. It helps with my game. It’s harder to pull your leg out when it’s locked down with gi pants. There was a whole big scandal over the pants. I asked to wear pants specifically, because in the rules it says all no-gi competitors must wear a rash guard and board shorts.

Abu Dhabi, which is the tournament that I beat him in the first time, their rules say you can wear whatever you want. So I asked Ralek if they cared if I wore gi pants and a rash guard. Royler said yes, as long as I promised not to change my mind. I was like, ‘Why would I have to promise not to change my mind?’ I should be able to wear whatever I want. I don’t care what he’s wearing, and he doesn’t have to get that cleared with me.

So now I gotta make promises and agreements that I won’t change my mind, but I said [in very affected voice], ‘Okay…I promise.’ Thing is, with the pants, Royler wanted to be able to grab onto my pants. So then they changed it to, ‘You can wear the pants as long as Royler can grab your pants and you don’t change your mind. He can grab them anywhere he wants.’

It was ridiculous. He shouldn’t have been able to grab and I should have been able to wear whatever I wanted. So with this weird logic and the need to be able to grab onto my pants, I decided, you know what, I’m going to wear shorts or tights. They were like, ‘No, you promised. You can’t change your mind. You promised to wear pants.’ I said, ‘I’m gonna wear tights. What’s the big deal?’

I posted up a picture of me in tights, and Royler got upset and actually got his lawyer involved. Then his lawyer starts threatening legal action. At that point, I was thinking if he’s getting his lawyer involved, fuck it, I’ll wear the pants. Let’s just do this shit.

The pants helped me in the beginning, but in the end, they saved his ass, because he grabbed them, keeping me from creating more pressure on that leg lock. He was holding my pants and I couldn’t free my right leg which would have added more power to the vaporizer.”

In a recent interview with Bloodyelbow.com, Metamros 3 headliner, Eddie Bravo, discussed the gi pants that nearly started a legal matter between himself and Royler Gracie.

In the end, the pants played little role in the bouts decision, but it gives us some insight on the politics of competition.