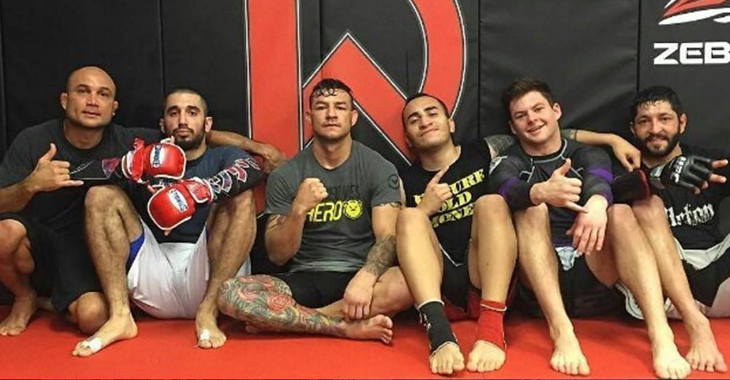 UFC Hall of Fame legend BJ Penn recently announced he will be returning to the Octagon for a run at the UFC featherweight title. In his attempt to do so, “The Prodigy” has taken a step outside of his comfort zone and has enlisted under the coaching of Greg Jackson and Mike Winklejohn at the JacksonWink MMA academy in Albuquerque, New Mexico.

It is a world away from his tropical homeland in Hilo, Hawaii. Penn finds himself in the desert at altitude but is settling into his new environment well with big goals in mind.

One thing Penn has found convenient in his new setting is simply being the student. With many of his past fight camps taking place at home in Hawaii, Penn said he doesn’t have as much to think about versus running his own camp.

“Man, in Hawaii back in the day, well maybe I just got older too, but back in the day I used to run a lot of my camps. Just simple, all I would do is just a little bit of strength and conditioning and train as hard as I could in martial arts. But, right now I’m really glad to be over here with Jackson and Winklejohn.”

Penn took us for a quick walk down memory lane, talking about his past fight camps at AKA.

“Over here at JacksonWinklejohn, you know I am just so glad that I can take everything out of my hands. ‘Jackson you do everything. This is the gameplan? You tell me what moves I should be doing, Winklejohn, you too.’ ”

Penn said he is there to learn from the best, taking their order and direction.

“They got me with their strength and conditioning guy. So I just wake up every day and I text Jackson, ‘what is the plan for today?’ He just tells me what time to show up.”

Regarding how his body feels being back in his first fight camp in over a year, Penn says things have been going well.

“My body has been feeling good. I’m eating a clean diet, trying to keep my body as healthy as possible. I realize I’m not 23-years-old. I’m just trying to keep myself as healthy as possible and eat the best foods that I can and work out as hard as I can,” Penn said. “Man, I’m just giving it my best effort. I don’t know if I’m the best. I don’t care, but giving it the best effort.”

With that said, it is what long time fans of Penn have loved about his attitude towards fighting. The Hilo boy who has found a new home in the desert has always been about the action and can’t wait to “just scrap!”