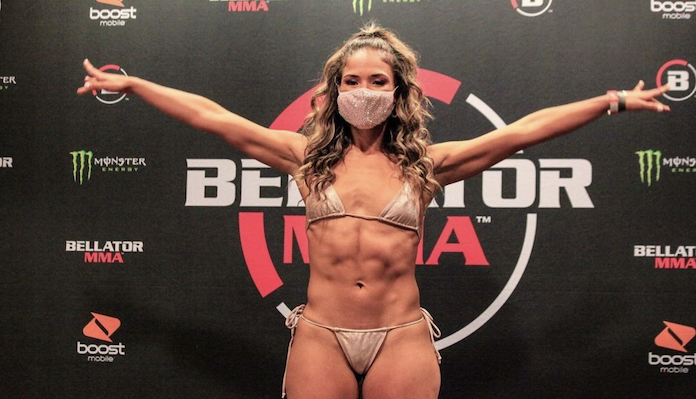 Valerie Loureda has shared an injury update following her first career loss at Bellator 259, this while providing her haters with a booty shake.

Loureda (3-1 MMA) had entered Friday’s bout with Hannah Guy (3-1 MMA) looking to build off her impressive knockout victory over Tara Graff from Bellator 243.

The 22-year-old would get off to a fast start in the fight, dropping Guy with an early combination. However, the tide would quickly turn after Hannah was able to take the fight to the floor. Guy nearly finished the fight with an armbar and then again with a mounted triangle, but Valerie Loureda showed her toughness and heart by surviving until the final horn.

After fifteen-minutes of thrilling back and forth action Hannah Guy was awarded a unanimous decision victory from the judges in attendance.

Shortly following the setback, Valerie Loureda would take to social media with the following message.

“You can’t teach heart. I’m 22 and you are watching my career develop in front of your eyes. To those who said I would get taken down and submitted in the first round, I proved you wrong. To my fans, I adore you. I love what I do, I was born to fight, and I will be champion.” – Loureda wrote on Twitter.

Now a few days removed from her first career loss, Valerie Loureda has provided an injury update along with a booty shake for her haters.

While Valerie Loureda may have suffered torn ligaments in her left arm, she is still planning on returning to the Bellator cage this coming July.

Who would you like to see Scott Coker and company match Valerie Loureda up with next following her decision loss to Hannah Guy at Bellator 259? Share your thoughts in the comment section PENN Nation!