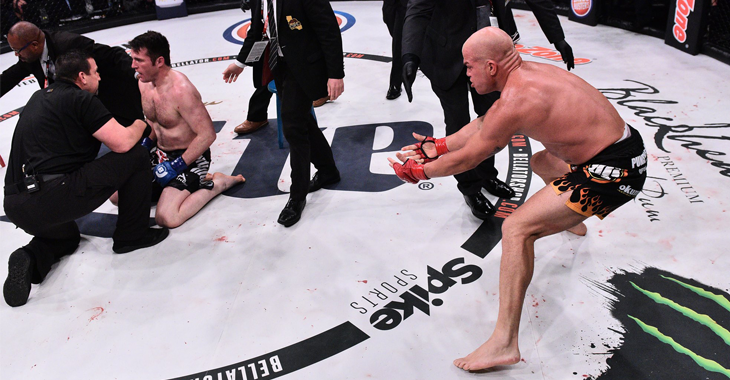 At least so it would seem. ‘The Huntington Beach Bad Boy’ took to Instagram where he posted a video of Chael Sonnen’s knockout loss, this while congratulating ‘The Dragon’.

“Thank you Lyoto Machida!!!!! The only reason I posted this!!! Just so you people know that Chael said some things about my family pre fight.” explained Tito Ortiz in the post. “I beat him and he came to my dressing room after the fight and said if we are cool? I told him to apologize at the press conference and we would be good. He didn’t. A month after the fight he started talk shit about my kids. Sorry people I don’t know how you were raised but another person should not talk about a mans family. Period.”

As seen in the above video, Chael Sonnen ate a jumping knee from Lyoto Machida that sent ‘The American Gangster‘ crashing to the canvas in round two. From there, ‘The Dragon’ would unleash some solid ground and pound which forced an end to the fight.

As for former UFC light heavyweight champion Tito Ortiz, the MMA legend has not competed since defeating Chuck Liddell via first round knockout under the Golden Boy Promotions banner in November.

In his most previous effort at Bellator 170, Ortiz had scored a submission victory over the aforementioned Chael Sonnen.

In April of 2019, it was announced that Tito Ortiz had signed a multi-fight agreement with the Combate Americas promotion. He is expected to make his promotional debut later this fall.

What do you think of Tito Ortiz recent Instagram post mocking Chael Sonnen? Sound off in the comments section PENN Nation!