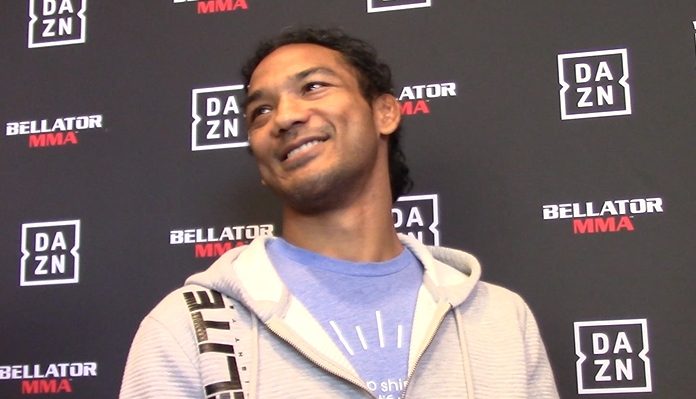 Bellator 220, from the SAP Center in San Jose, California, is a wrap.

With a whopping 18 fights on the night (including the usual Bellator post-lims) there were plenty of opportunities for fighters to make a statement. Let us take a deeper look and see what fighters showed out in Central Cali.

Gaston Bolanos notched his fifth professional victory over the weekend. All five have been with the Viacom owned promotion.

The 26-year-old Peruvian featherweight is quickly becoming must-see TV for Bellator. With every one of his five victories ending via some form of violence perpetrated by Bolanos on his opponent.

“The Dreamkiller” should have a step up in competition in his next fight but matchmakers could have a hard time finding him a willing dance partner.

After a rough start to his Bellator career that saw the former UFC lightweight champion go just 1-3 in his first four fights for the Scott Coker run promotion, it looks like Benson Henderson has found his Bellator groove.

Henderson has now won three straight and his fight with Adam Piccolotti from last weekend’s card is already being talked about as a fight of the year candidate.

Whether you think Henderson won or Piccolotti won, it’s safe to say the former UFC lightweight champ is far from done.

Ilima-Lei Macfarlane Can Do It All

It’s hard to believe that Ilima-Lei Macfarlane only has 10 professional fights. All of those fights are wins however.

“The Ilimanator” keeps finding new ways to punish her opponents. Already having a knock out victory to her credit as well as two decisions and six submissions, Macfarlane earned the rare doctor stoppage at Bellator 220 when she opened one of the nastier gashes in recent memory on Veta Arteaga’s forehead.

It looks like Bellator has a burgeoning superstar on their hands with Ilima-Lei Macfarlane.

Although he didn’t fight at Bellator 220, the unbeaten Neiman Gracie sure gained some traction in the Welterweight Grand Prix.

Gracie will now fight Rory MacDonald for the welterweight title in the next round of the Grand Prix. And if “The Red King’s” post fight rambling are any indication of his mindset heading into his title fight against Gracie, we could have a new champion soon.