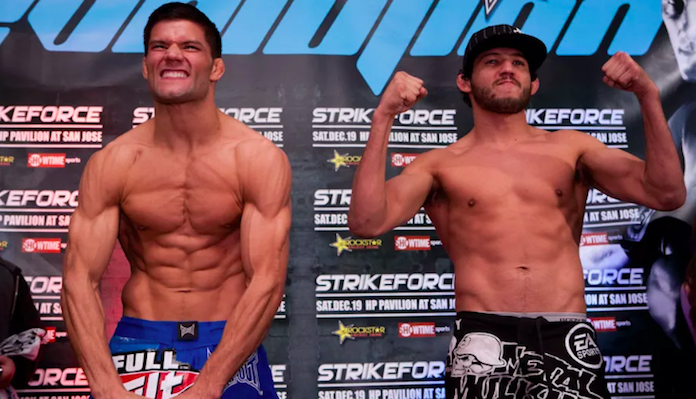 We could see a fourth fight between lightweight legends as Josh Thomson says he wants to run it back with long-time rival Gilbert Melendez in Bellator.

Melendez was released by the UFC last week following a five-fight losing skid and has since been connected to signing with Bellator, with whom he signed an offer sheet five years ago before the UFC matched it. Thomson, who is an analyst for Bellator’s broadcasts on DAZN, is semi-retired at this point, but he is still under contract with the promotion.

Speaking on the “Weighing In” podcast, Thomson said he is open to fighting his long-time rival Melendez for the fourth time. The two previously met in Strikeforce three times in one of MMA’s all-time greatest trilogies. Thomson won the first fight by clear decision, Melendez won the second fight by clear decision, and the third fight was a narrow split decision in Melendez’s favor. Now Thomson says he wants to settle the score and fight Melendez one more time.

Here’s what “The Punk” said on his podcast.

“I think the bottom line is this. Everyone’s already seen the newsfeeds. Gilbert Melendez was released and let go from the UFC. Scott Coker has always worked really well with Gil from the Strikeforce days. This would not even be considered a money fight. This would be more like a situation where the two of us feel like there’s unsettled business. I won the first fight hands down convincingly, he won the second fight hands down convincingly, and the third fight was a split decision loss for me and for him it was very controversial he won the fight,” Thomson said.

“Let me remind you, we spent 75 minutes in the cage. Every time it was for the title. This time it’s not for the title. This time it’s a three-round fight. Bellator doesn’t do five-round main events. This is a good opportunity for the two of us. We both know we’re not what we used to be. There’s no doubt about that, we’re not denying that. The thing is, we both feel like there’s unsettled business. I do believe if we’re going to do this, I’m under contract with Bellator, so if this fight is to happen, it has to happen in Bellator.”

Thomson told fans to tell Bellator and its president Scott Coker if this is a fight they want to see. After engaging in on the greatest trilogies of all time, even though both guys are in the latter stages of their careers, the fourth fight at this point makes a lot of sense.

Would you be interested in watching Josh Thomson vs. Gilbert Melendez 4 in Bellator?