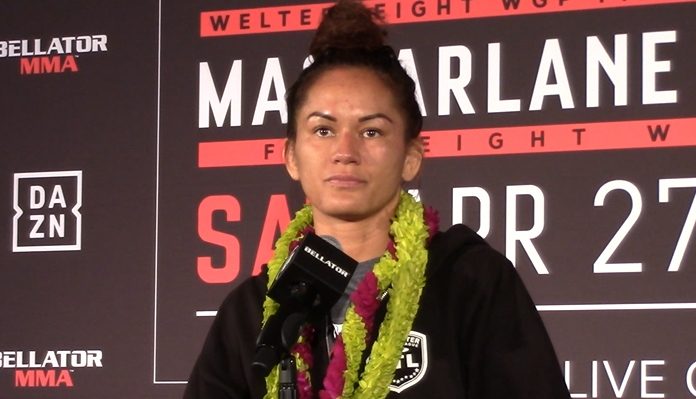 Macfarlane was viewed by some as an underdog heading into the bout last night that saw the two put their respective unbeaten records on the line. In the end, it was Velasquez who was able to grind out the unanimous decision win that ensured she was the one who walked away as champion.

During her post-fight press conference, Macfarlane was incredibly honest in discussing her emotions and how much pressure comes with holding the belt for so long.

All class from @ilimanator after #Bellator254 👏

The pressures of being not only a champ but an undefeated champ are real. pic.twitter.com/4JsrOsynKQ

“Yeah, no this is cool,” Macfarlane said. “Honestly this is, in a really weird way, this is kind of always what I felt like I needed in my career. You can’t always just keep winning and excelling, you know? You have to hit some type of plateau or something. I’m actually really happy that this happened, or I’m like relieved, that ‘okay, this is what it feels like to lose.’

“I’m good, I’m so good right now,” Macfarlane concluded. “I feel more bad for my fiancé that he had to watch me get all bloodied up—this is his first fight that he’s ever watched! So sorry babe, but I promise I’m okay, mom, dad, I’m okay. These are tears of relief. It’s hard being the champion, it is. It’s hard being it for so long. I’m really grateful for this experience and this moment.”

Being on top of the mountain can be a strenuous process and it’s something that has been discussed at length by many great champions in the last, most notably Georges St-Pierre.

What do you think the future holds for Ilima-Lei Macfarlane?