Gegard Mousasi is booked to fight Austin Vanderford this weekend at Bellator 275. Despite that booking, it seems that the Bellator middleweight champion is already looking to a future opponent.

‘The Dreamcatcher’ is currently coming off a stoppage win over John Salter at Bellator 264. The TKO victory was the first of his second reign as Bellator’s middleweight champion. While viewed as one of the greatest 185-pound fighters on the planet, it seems that he’s turning his view away from MMA for a potential fight in the ring.

Gegard Mousasi went on to The MMA Hour with Ariel Helwani earlier today. While on the show, he talked about future opponents, and he decided to shoot his shot. The 36-year-old seemingly wants to fight former UFC middleweight champion, Anderson Silva, in boxing.

‘The Spider’ moved back to the sport in 2021. He defeated Julio Cesar Chavez Jr. and Tito Ortiz in a decisive fashion to become one of the most-talked-about stories of the year. It seems that the former amateur boxer Mousasi wants to be Silva’s next opponent in the ring. 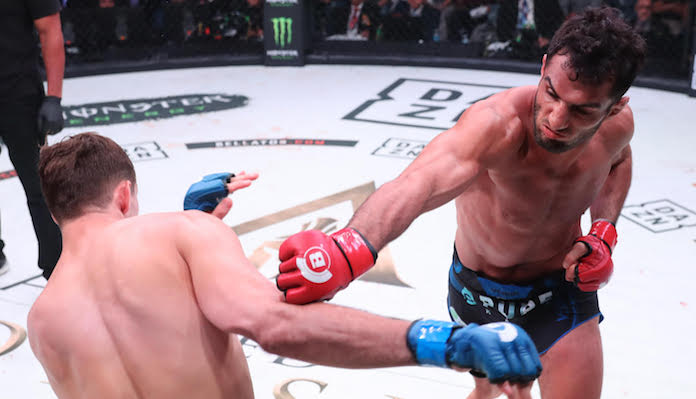 “Unfortunately I’ve fought twice the last two years. I would have loved to fight more but it’s the pandemic. They’re gonna keep me busy this year. Three times and I want to fight Anderson Silva in boxing. My managers are gonna push for that fight. You, Anderson, don’t run away from me.” – said Gegard Mousasi on The MMA Hour Wednesday (h/t MMAFighting)

Mousasi continued, “Now it’s up to him. I think it’s not very interesting [to fight him in MMA]. In MMA he has lost, but in boxing, he’s still winning. I think it’s different and it’s more entertaining. I threw it out to Scott [Coker] and Showtime. … I’ve been pushing for it.”

What do you make about Gegard Mousasi’s comments about fighting Anderson Silva in boxing? Would you like to see the matchup?