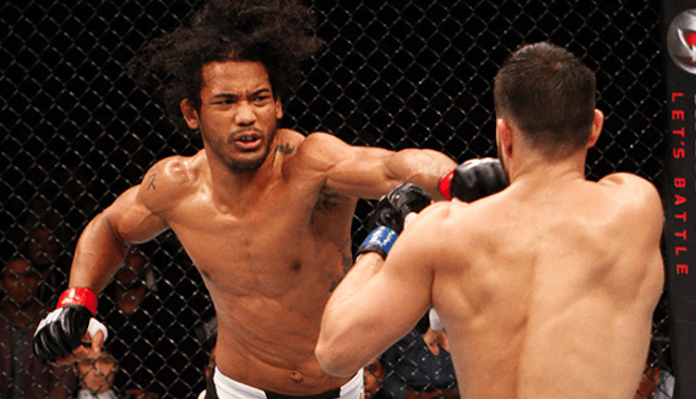 Former UFC lightweight champion Benson Henderson is now firmly embedded as a member of the Bellator roster. In fact, he’s set to return to the cage at Bellator 220 this weekend, where he’ll take on Adam Piccolotti in a lightweight contender bout.

As he prepares for this imminent challenge, Benson Henderson is happy to have put some distance between himself and the drama that is currently plaguing the UFC lightweight division. He’s witnessed the heat between reigning champion Khabib Nurmagomedov and former champion Conor McGregor, and the difficulty top contenders like Dustin Poirier and Tony Ferguson have had getting title shots, and he’s thanking the Lord that he’s no longer in the thick of it.

“I thank the Lord I don’t have to deal with that part of the job,” Henderson told MMA Fighting ahead of Bellator 220. “And I never really dealt with it in the first place, I wasn’t one of those guys that was like, ‘Aw, I gotta deal with this.’ But whatever, it’s like water off a duck’s back. It’s no big deal.

“But man, when you’re on a six-fight, seven-fight win streak and you can’t get a title shot call, or it just doesn’t go your way. There’s a bunch of stuff, but it’s just like the politics of it, you’re not known for what you do inside the cage. You’re more known for what you do outside the cage. That very much irks me, because I’m pretty boring outside the cage. I’m a blue collar, I go to work, I bust my ass in the gym, but I’m not somebody who’s going to say something outlandish just for the sake of getting a few more Twitter followers or I’m not gonna pose naked for more Instagram followers. I’m not one of those guys that says something stupid just for the sake of getting more attention.”

Benson Henderson continued, sharing his belief that the current landscape of the UFC is causing fighters to underdog unnatural transformations.

“I think in the UFC that’s exactly the route you have to go. You have to say something incredibly stupid, you have to wear sunglasses inside to get the attention,” Henderson said. “You have to start wearing fur coats. I see these younger guys, when they get into the UFC, they’re pretty normal, straight-laced, good guys, just hard workers, that’s how they got to the UFC. And then they go on a two-fight, three-fight win streak and all of a sudden they’re wearing fur coats to media interviews and wearing sunglasses inside. It’s like, who is this guy? Where’d you come from?

“Yeah, we’re all growing, we’re all changing, you’re not going to be the same person at 29 that you were at 24, but that being said, you’re going to become somebody who wears a fur coat in the middle of July, like, come on, be serious there, kid. It is what it is, so I am very happy, very thankful that I don’t have to deal with that for sure.”