Romero (13-5 MMA) has not competed since suffering a unanimous decision loss to Israel Adesanya for the UFC’s middleweight championship in March of 2020. That setback marked his third in a row, as ‘The Soldier of God’ had previously been outpointed by Paulo Costa and Robert Whittaker.

Meanwhile, Phil Davis (22-6 MMA) will enter tonight’s Bellator 266 headliner with Yoel Romero in hopes of rebounding from his unanimous decision loss to reigning light heavyweight champion Vadim Nemkov this past April. Prior to that loss, ‘Mr. Wonderful’ was sporting a three-fight winning streak, which included two TKO victories. 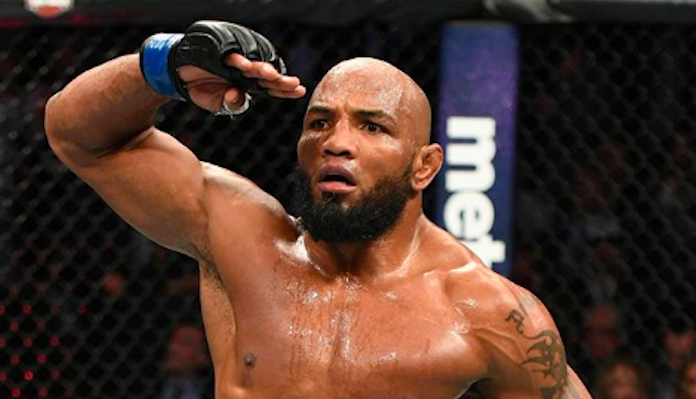 Round one of the Bellator 266 main event begins and there is a bit of a feeling out process to start. Phil Davis comes forward with a combination but Yoel Romero is able to avoid. ‘Mr. Wonderful’ lands a right hand up the middle. ‘The Soldier of God’ responds with a high kick. He follows that up with a low kick. He lands another. Davis with a jab but eats another inside low kick. Yoel Romero misses with an axe kick and then just grazes Davis with a right hand. Phil responds with a low kick. Romero returns fire with one of his own. Big shots from both fighters. Phil Davis lands a hard low kick. Romero swings and misses with a big left. Thirty seconds remain in the round. Davis with another hard low kick. Romero just misses with a front kick up the middle. The horn sounds to end the opening round.

Round two of the Bellator 266 main event begins and Phil Davis lands a combination. Yoel Romero responds with a counter left. Both men are happy to stand and trade now. Romero with a big combination. Davis shoots in for a takedown but Yoel stuffs it with ease. ‘Mr. Wonderful’ decides to get to work with his jab. Yoel with a leaping left but it is way off. Davis is starting to get the better of these exchanges. He smashes ‘The Soldier of God’ with a right hand. Romero smiles but that clearly hurt. The fighters start exchanging strikes and then Phil Davis shoots in and lands a takedown. He begins working from the half guard of Yoel Romero. The horn sounds to end round two.

Round three of the Bellator 266 headliner begins and Yoel Romero looks to come forward quickly. Phil Davis is doing a good job of keeping him at bay with his jab. ‘Mr. Wonderful’ with a front kick to the ribs of Romero. He shoots in and takes Yoel down for a second time. ‘The Soldier of God’ gets back to his feet but Davis quickly plants him back on the canvas. Davis is working some ground and pound now. Yoel Romero explodes and gets back up to his feet. Phil Davis immediately dives back in on a takedown and gets it. He begins hammering the ribs of Romero with right hands.

Who would you like to see Davis fight next following his victory over Romero tonight in San Jose? Share your thoughts in the comment section PENN Nation!