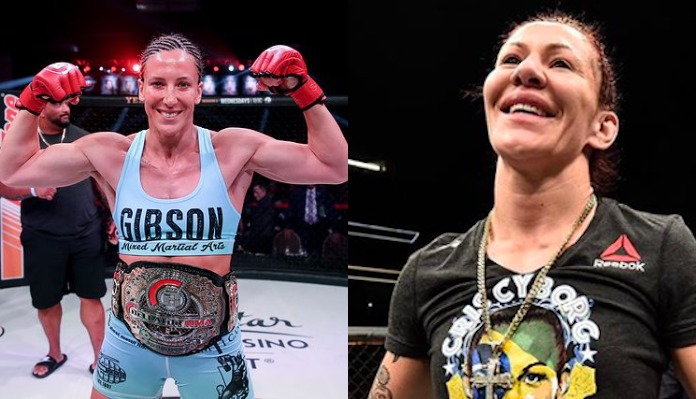 Bellator MMA is in Inglewood, California tonight for Bellator 238 which features the women’s featherweight title on the line as Julia Budd battles Cris Cyborg in the main event.

Budd (13-2) is looking to defend her belt for the fourth time and extend her winning streak to 12. She won the inaugural featherweight title back at Bellator 174 with a TKO win over Marloes Coenen. The Canadian has not lost since her fourth professional fight back in 2011 where she was submitted by Ronda Rousey. Her other loss came at the hands of Amanda Nunes.

Cyborg (21-2 and one no-contest) is making her promotional debut and looking to become the first person to win a title in Strikeforce, Invicta, UFC, and Bellator. She got back into the win column last time out with a decision win over Felicia Spencer. Before that, she suffered a shocking first-round knockout loss to Amanda Nunes to lose her title.

The co-main event sees Darrion Caldwell battle the undefeated Adam Borics in the quarterfinals of the featherweight grand prix.

Caldwell (14-3) got back into the win column last time out with a decision win over Henry Corrales. Before that, he suffered back-to-back losses to Kyoji Horiguchi in a fight for the vacant RIZIN bantamweight title and followed by losing his Bellator bantamweight title.

Adam Borics (14-0) earned another TKO win last time out as he beat Pat Curran in the opening round of the grand prix. In the fight before, he shocked many and knocked out Aaron Pico with a flying knee.

The main card also features Sergio Pettis making his Bellator debut and Juan Archuleta taking on Henry Corrales in a fight that guarantees fireworks. Bellator 238 prelims have some notable names as well as Aaron Pico is looking to snap his two-fight losing streak and Curtis Millender is set for his first fight since his UFC release.

Things are heating up in round one between @CrisCyborg and @JuliaBudd.#Bellator238 pic.twitter.com/5qx3OTOt7o

If this doesn’t get you hyped for @TheWolfMMA vs. @AJMcKee101, I don’t know what will. pic.twitter.com/SnI4vLqbwo

Talk about a war! Round two between @TheFloridaBoy and @KyokushiNinja had us on the edge of our seats! #Bellator238

There is still time to watch round 3 on our YouTube channel LIVE now! ▶️ https://t.co/ZRiY4VJ3o6 pic.twitter.com/aN5h6jzrc8

Who are you picking to win Bellator 238’s main event between Julia Budd and Cris Cyborg? Sound off in the comment section, PENN Nation!