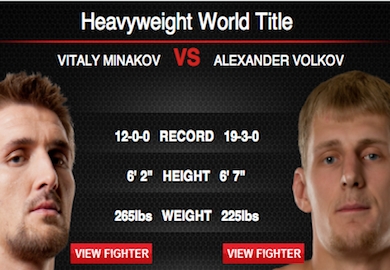 The Bellator Heavyweight Championship will stay in Russia, but it found a new owner in Vitaly Minakov.

Vitaly Minakov was looking for the overhand right early, but only found air. He was then taken down after pressing Volkov up against the cage. It looked as if Volkov would get the advantage, but Minakov quickly turned things around and ended up on top. After a lull in activity, the referee stood them up.

Minakov went right back to throwing the overhand right, this time connecting with Volkov’s skull. Volkov fell to the canvas and Minakov dove right on him. He threw a barrage of strikes that Volkov could only block for so long. Soon enough, Dan Miragliotta called a stop to the fight after he saw Volkov was simply blocking the strikes and not trying to move away from them.

Vitaly Minakov defeated Alexander Volkov by way of TKO (Punches) 2:57 of Round 1