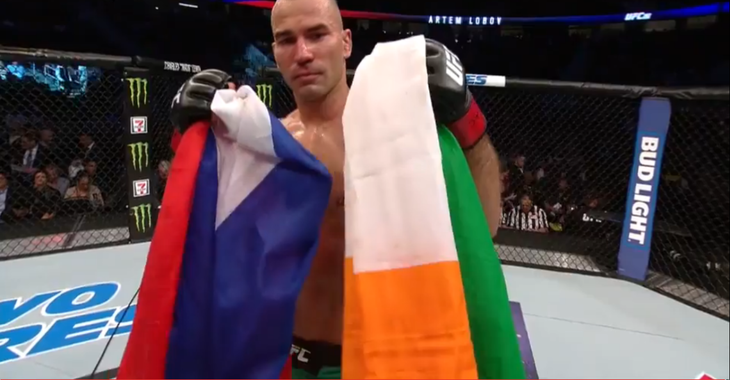 On April 22, in the main event of the UFC’s latest trip to Nashville, Tennessee, unranked featherweight Artem Lobov will take on the division’s fourth ranked fighter in Cub Swanson. Given their starkly different stations in the featherweight division not many people seem to give Lobov, who trains alongside Conor McGregor at SBG Ireland, much of a chance. According to Lobov himself, however, this is a dream fight, and one he expects to win by knockout.

“Cub Swanson, I’ve been watching him for many years and he has a very good style,” Lobov said on The MMA Hour (via TheMacLife.com). “He likes to stand and he goes for it. When I saw his fight against [Doo Ho] Choi, I thought ‘that was a great fight, I’d love to be involved in one of those’. And realistically, I thought they might give me Choi. I didn’t actually expect to get Cub, even though I wanted him, I wasn’t sure they would give him to me.

“In the end they did,” Lobov added. “All I had to do was message [UFC matchmaker] Sean Shelby, and I said ‘Sean I know you think that Cub will beat me, but let me prove you wrong’.”

“I know I’ve been saying this a lot, that I’m going to get the knockout,” Lobov continued, offering up a prediction on how this fight will go. “And it hasn’t happened, but against [Teruto] Ishihara, I almost got it. I think against Cub, I get it done. He comes in, he’s very open, he throws wild shots. He has never, I promise you, in his life felt power like I have.”

Do you think Artem Lobov can succeed where fighters like Doo Ho Choi, Max Holloway and Frankie Edgar failed and put Cub Swanson down with strikes? Sound off, PENN Nation!