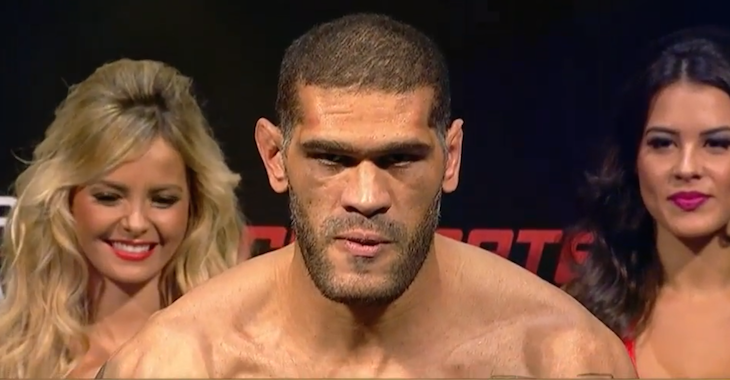 Antonio ‘Bigfoot’ Silva has earned the unwanted distinction of being the second most knocked down fighter in history, according to Fightnomics.

The Brazilian heavyweight has been on a downward slide ever since his knockout wins over Travis Browne and Alistair Overeem almost four years ago. ‘Bigfoot’ (19-9) has been knocked out five times since 2013, with every one of his losses coming by way of KO.

Ouch!
Antonio "Bigfoot" Silva has been one of the most frequently knocked down fighters ever.

The one-time heavyweight title challenger was knocked out by Stefan Struve in a mere 16-seconds in his last fight and is set to face heavy-handed Roy Nelson on Saturday in Brazil. ‘Bigfoot’s’ UFC debut set an unfortunate tone, as the massive heavyweight was brutalized by Cain Velasquez in the first round back at UFC 146, and had entered the promotion following another devastating KO loss to Daniel Cormier in the Strikeforce Heavyweight Grand Prix Semi-Finals in 2011.

‘Bigfoot’s’ two wins in a row over Browne and Overeem were impressive enough to warrant a rematch with Velasquez, who at that time had regained the belt from Junior dos Santos. Cain not only knockout out ‘Bigfoot’ again in their UFC 160 title fight, he did it in a little over a minute into the first round. Silva has fought six times since his second TKO loss to Velasquez, going 1-4-1 with one TKO win over Soa Palelei, a draw with Mark Hunt, and four knockout losses to the likes of Frank Mir, Andrei Arlovski, Mark Hunt in their rematch, and the aforementioned 16-second KO loss to Struve.

So it shouldn’t come as too much of a surprise to fight fans that ‘Bigfoot’ is the second most knocked down fighter in UFC/Strikeforce/Pride/WEC history. Can ‘Bigfoot’ Silva end his knock out loss streak against the notoriously tough and heavy-handed Roy ‘Big Country’ Nelson? Do you think he should retire with another KO loss? Sound off, PENN Nation!