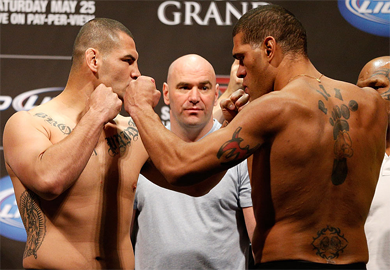 With a win over Mark Hunt, Junior Dos Santos has secured his shot at the UFC heavyweight title, now we tune in to Velasquez vs. Bigfoot II to see who JDS will be fighting.

They come out quickly and Bigfoot stuffs two takedowns before getting caught and dropped. Velasquez swarms in and Mario Yamasaki calls it a fight.

Cain Velasquez retains the UFC heavyweight championship in impressive fashion, he will most likely face Junior Dos Santos next.