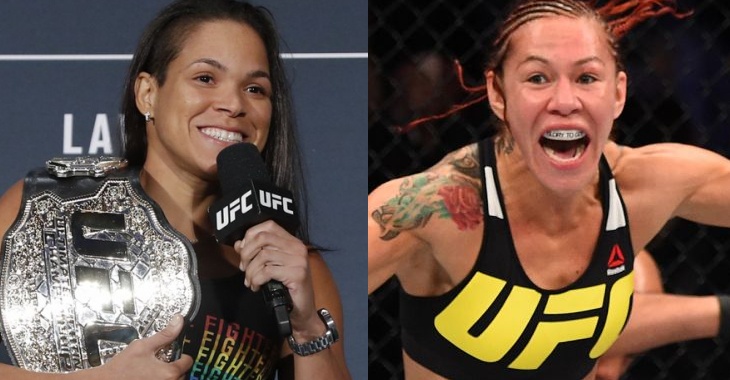 Just a few years ago, the biggest possible fight among the women would have obviously been the former UFC Bantamweight champion, Ronda Rousey vs at the time, the Invicta FC Featherweight champion and former Strikeforce Featherweight champion, Cris Cyborg. It was always an issue of Cyborg making 135 lbs…since that was initially the only division for the women before the UFC introduced the 115 lb Strawweight division. Then by the time that Cyborg had come to the UFC, Rousey had been dethroned in devastating fashion and the opportunity for a big female super fight died. That is perhaps until now.

After Cyborg’s dominant decision victory over the woman that dethroned Rousey, Holly Holm at UFC 219, everyone has begun to ponder what’s next for the longtime ruler of 145. The obvious choice is fellow top three Featherweight worldwide, the Australian, Megan Anderson. Anderson was the most recent Invicta FC Featherweight champion prior to her signing to the UFC to fight Cyborg for the vacant title at UFC 214 before being forced out for undisclosed reasons. It’s not like Anderson is unqualified, but she is also the only other Featherweight on the UFC roster.

Anderson is yet to be cleared for action though so now the most likely looking option appears to be current UFC Bantamweight champion, Amanda Nunes who initially wasn’t too fond of the idea of fighting fellow countrywomen, Cyborg.

First of all, I have nothing personal against @criscyborg I do believe it is the fight that everyone wants to see and a fight where we can both leave our marks on this sport.

First of all, I have nothing personal against @criscyborg I do believe it is the fight that everyone wants to see and a fight where we can both leave our marks on this sport.

Nunes vs Cyborg would indeed be the biggest female fight to date and a great super fight for the fans. Many might not know that Nunes was actually a Strikeforce Featherweight prospect back when Cyborg was the champion. She fought her first seven career fights at 145 before dropping to her current home of 135. At Featherweight, Nunes defeated the likes of Ediane Gomes and most notably Bellator’s current champion, Julia Budd. Nunes KO’d Budd in just fourteen seconds.