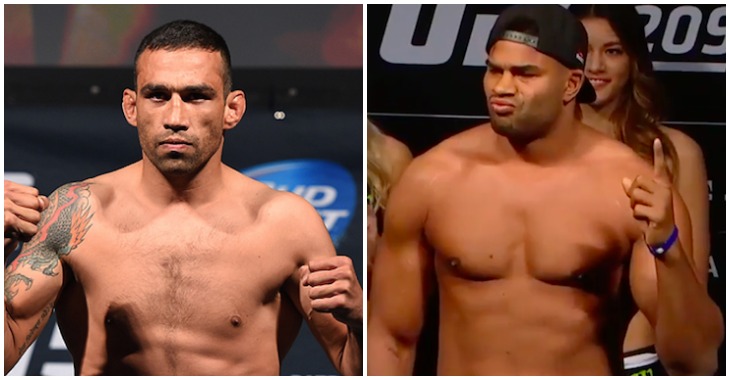 At the moment, not much is known about this UFC 213 pay-per-view. From the sounds of it, however, this event might just have gotten its first major fight: a heavyweight rematch between former UFC champion Fabricio Werdum, and former Strikeforce, Dream and K-1 champ Alistair Overeem.

This fight has been reported by both FloCombat.com, and Twitter user Dizz.

Overeem and Werdum have met twice before. They first met under the Pride banner, all the way back in 2006. On that night, Werdum emerged the victor with a second-round kimura. The pair’s second meeting occurred in June of 2011, under the Strikeforce banner. In this second fight, Overeem earned the win with an insipid unanimous decision.

When we last saw Overeem in action, he scored a thunderous, knee-induced knockout win over Mark Hunt. This win separated the striking veteran from a first-round knockout loss to Stipe Miocic, which marked a failed attempt to capture the UFC heavyweight crown.

Werdum, meanwhile, has not been seen in action since September, having recently had bouts with Cain Velasquez and Ben Rothwell cancelled. In his last bout, he scored a bizarre decision win over Travis Browne. This win separated him from his own knockout loss to Miocic, which marked the end of his reign as UFC heavyweight king. Prior to this loss to Miocic, he captured the heavyweight crown with a submission of former champ Cain Velasquez.

When this Fabricio Werdum vs. Alistair Overeem bout is confirmed by the UFC, it will become the first official addition to the UFC 213 lineup. We can expect many more announcements surrounding this card to emerge over the coming weeks. Stay tuned to BJPENN.COM for UFC 213 news as it emerges!