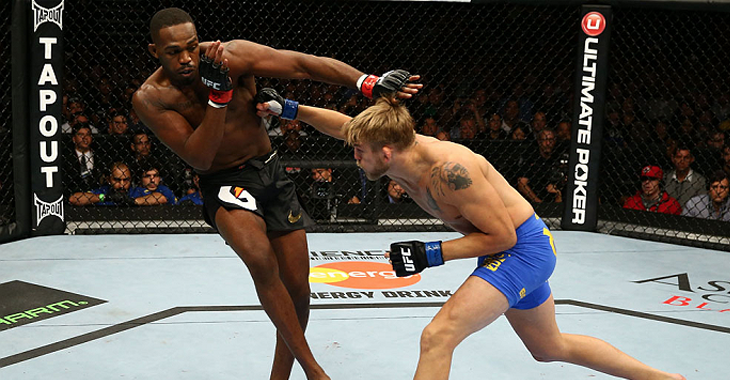 Earlier today, Swedish MMA publication MMANytt reported that a light heavyweight title fight between champion Jon Jones and challenger Alexander Gustafsson was in the works for UFC 218, which is scheduled for December 2 in Detroit, Michigan. Apparently, however, this report is inaccurate.

Speaking to Kimura.se, another Swedish publication, Gustafsson revealed that he currently camping with his friends, and that he’s not a part of any discussions regarding a fight with Jones at the moment.

“I have not talked about my next match with the UFC yet, so I completely deny MMAnytt’s story,” Gustafsson said (via MMAUno.com). “They need to change their source. I am currently camping with some good friends, but as soon as something goes true, I will communicate through my channels or who knows, maybe directly to Kimura.”

While Gustafsson denies any discussions of a bout with Jones, we know that this is something he wants. Shortly after Jones reclaimed the light heavyweight title with a third-round head kick induced knockout of Daniel Cormier at UFC 214, Gustafsson took to Twitter to call him out.

@JonnyBones congrats Champ. Stop asking for retired fighters, I’ve been waiting to put my hands on you and so have all the fans.

In this tweet, Gustafsson is referencing Jones’ repeated calls for a fight with former UFC heavyweight champ and current WWE star Brock Lesnar, which is now looking quite unlikely.

Jones and Gustafsson first met back in 2013, in the main event of UFC 165 in Toronto. On that night, Jones escaped with a narrow decision win that is still debated to this day. The grounds for a rematch, then, undeniably exist. That rematch just doesn’t seem likely for UFC 218 in Detroit.

Do you want to see Jon Jones and Alexander Gustafsson rematch? Who do you think wins the do-over?