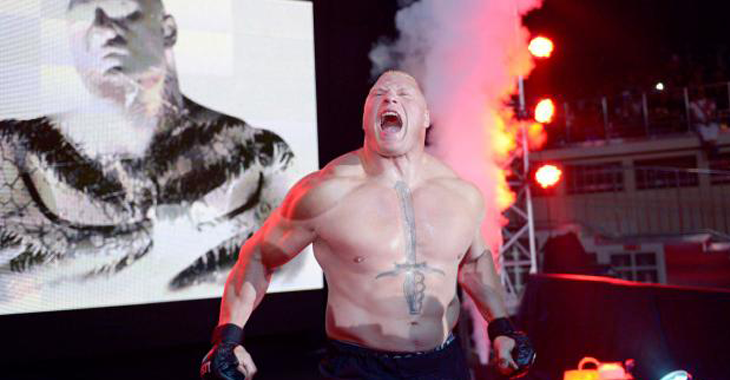 “The Beast” was pitted in a Fatal 4-Way match against Braun Strowman, Samoa Joe and Roman Reigns.

Before we go any further, it is important to note that on a recent edition of Monday Night Raw, Brock Lesnar and his manager Paul Heyman shocked fans by announcing that if “The Beast” was to lose his WWE Universal Title at SummerSlam, that he would leave the Pro Wrestling promotion entirely.

How does this pertain to mixed martial arts you ask?

Well as we all know by now, Jon Jones (23-1 MMA) was able to reclaim his UFC light heavyweight championship last month in Anaheim, scoring a third-round knockout victory over his bitter rival Daniel Cormier in the main event of UFC 214.

In his post-fight octagon interview, “Bones” would proceed to callout former UFC heavyweight champion Brock Lesnar by issuing the following challenge to “The Beast”.

“Lesnar. If you want to find out what it’s like to get your ass kicked by a guy who weighs 40 lbs less than you, meet me here in the octagon.” – Jon Jones

It did not take long for Jon Jones to receive a response, as Brock Lesnar (5-3 MMA, 1 no-contest) issued the newly crowned UFC 205-pound champion the following warning in an interview with The Associated Press.

“Be careful what you wish for young man.” – Brock Lesnar

With all of that said, let’s get back to tonight’s SummerSlam main event results.

After being slammed through two tables by Braun Stroman, Brock Lesnar was somehow able to come back and hit an “F5” on Roman Reigns which resulted in a pinfall victory.

It looks like fight fans will now have to wait a little longer for the proposed Brock Lesnar vs. Jon Jones super fight to happen.