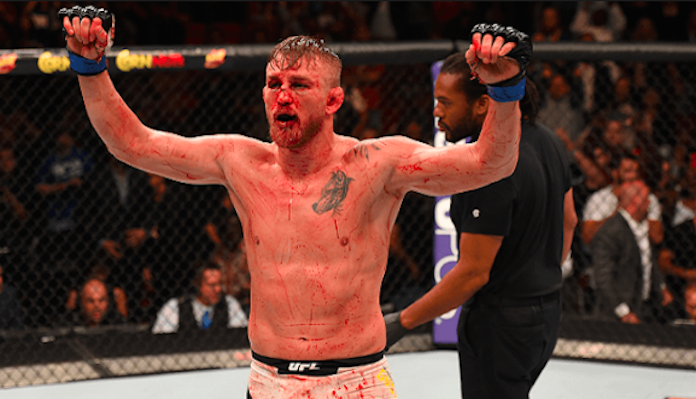 Though Alexander Gustafsson’s recent career has been somewhat hindered by unfortunate injuries, it sounds like he’s still far from the end of the road. On Thursday afternoon, the long-time light heavyweight contender and two-time title challenger took to Instagram to announce a lucrative new deal with the UFC. In the caption for this Instagram post, he also took a subtle dig at reigning UFC light heavyweight champion Daniel Cormier, who has assured he’ll be retiring soon.

“While others are talking about retirement, I just signed my new deal with the @ufc today,” Gustafsson said in the caption for his post. “I am grateful, excited, and I will be fighting very soon! I need to thank my family, my team @wesportagency and @allstarsgymsweden. I would also like to give a special thank you to my fight management @neems01 and @majdishammas at Moments Sports Management for securing the biggest deal of my career. Soon to be the world champion!!! 🏆🥇#soontobeworldchamp #team #loyalty #family.”

Alexander Gustafsson is currently on a two-fight win-streak composed of a decision defeat of Polish contender Jan Blachowicz, and an impressive knockout over former title challenger Glover Teixeira. These wins were preceded by a pair of losses, to champion Daniel Cormier, and top contender Anthony “Rumble” Johnson. Gustafsson is currently 18-4 overall, and a solid 10-3 in the dangerous UFC light heavyweight division.

Do you expect Alexander Gustafsson to get a second crack at light heavyweight champ Daniel Cormier?