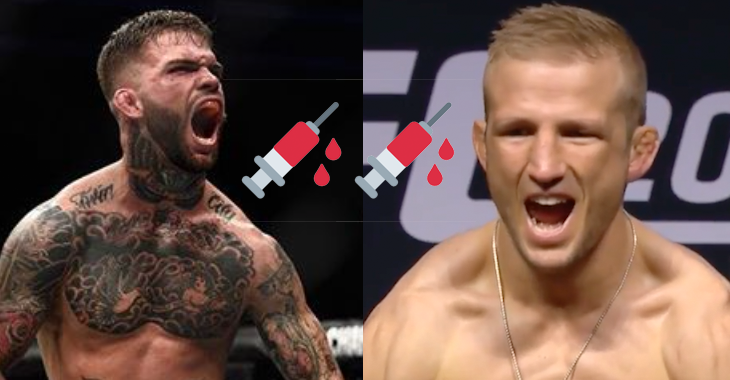 Once upon a time, all was well in the California city of Sacramento. The top MMA gym for lighter weight fighters, Team Alpha Male was thriving with talented members all atop their respective divisions. Everyone got along just fine…!

Then one day…it all would change. A member would disband from the team and reasons to why were verbally thrown all over from seemingly everyone with a voice.

The beef between the two parties appeared to be settled(briefly) after resolving things with their fists at UFC 217 but now a rematch has been booked and former UFC bantamweight champion and Team Alpha Male staple will get his instant rematch with the man who took the title from him, his former teammate, TJ Dillashaw.

In the leadup to their eventual meeting in the cage, we saw several encounters between the two whether it be verbal or in person. One of the many things said that was most interesting came from Garbrandt who accused his former teammate of using performance-enhancing drugs as he said, “TJ showed the team how to use PEDs”.

Garbrandt wouldn’t end up being the only former teammate to make accusations as The Ultimate Fighter season 18 winner, Chris Holdsworth did as well. Holdsworth stated the following when speaking on the MMA Hour back in October.

“There was another instance leading up to the Chico [Camus] fight [in 2014], when he was getting ready for [Renan] Barao. And then it comes to where I hear he’s on some special supplements and stuff, and I just lost respect for the guy. There’s no hard feelings, it’s whatever it is, but he’s a cheater.

You can put two and two together”

And it hasn’t stopped there.

Garbrandt commented on a recent quote from Dillashaw regarding his rumored potential super fight with current UFC flyweight champion, Demetrious Johnson(that obviously isn’t happening next) where he said, “And the UFC told me how many excuses you made not to fight me [Dillashaw]”. Which prompted as follows:

Garbrandt: No shit! I’m talking about the March fight and then you said you were hurt, must be all that EPO going to your head! Have a safe camp see you in aug!

Dillashaw: 🤦‍♂️….🤫 Says the guy who delayed our first fight by 5 months because of injury.

EPO stands for ‘Erythropoietin’ and boosts athletic endurance because of its extra oxygen carrying capacity.

The rematch between Dillashaw and Garbrandt will take place at UFC 227 in Los Angeles on August 4th. For Garbrandt, the first encounter between the two was the first loss of his professional career and with this immediate rematch, it makes him the first former champion with no title defenses to get an instant rematch after losing via finish.

All UFC champions to have gotten immediate rematches after dropping their title have lost said rematch with the exception of Randy Couture who lost that title by a doctor’s stoppage due to a cut very early into the fight.