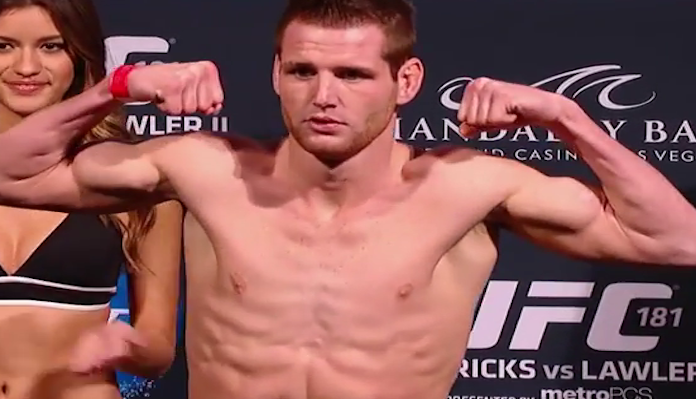 Collard previously fought in the UFC from 2014 to 2015, going 1-3 with a win over Alex White and losses to Max Holloway, Gabriel Benitez and Tiago Trator. He still competes in mixed martial arts but in 2017 made his pro boxing debut and has gone 6-2-3 since then.

Collard’s latest victory came over Guajardo was by far his biggest win in boxing yet. Take a look at the video of the finish below courtesy of FS1.

Clay Collard lands the BIG upset against previously unbeaten prospect Ray Guajardo by TKO in Round 2. What a fight!! pic.twitter.com/UGw3mOxpEC

“That’s all she wrote!! Clay Collard lands the BIG upset against previously unbeaten prospect Ray Guajardo by TKO in Round 2. What a fight!!”

It was an awesome moment for Collard, who was an underrated MMA fighter during his time in the UFC. Overall Collard has a professional MMA record of 18-8, 1 NC, with his most notable victory in mixed martial arts being a win over former Team Alpha Male coach Justin Buchholz in 2013.

This win in boxing is huge for Collard as he has aspirations to have a long career in the boxing world. Although Collard has a very good record in MMA, for whatever reason he was never able to stick around with a major organization. Even though he was 1-3 in the UFC, he fought quality competition and another big promotion like Bellator or PFL never decided to sign him.

The UFC did actually re-sign Collard last year to fight Devonte Smith at UFC 241, but there were undisclosed issues that led to him being released from the promotion again and Khama Worthy ended up getting the Smith fight, winning by upset stoppage win. Perhaps after this big win in boxing, the UFC may come calling again.

What did you think of this win by Clay Collard over Ray Guajardo?