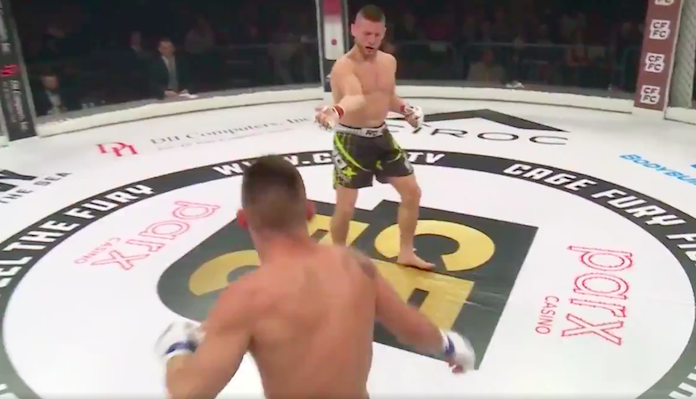 One of the nastiest injury stoppages you will see in mixed martial arts took place on Saturday night in the main event of CFFC 81.

The CFFC featherweight champion Pat Sabatini saw his arm twist during a nasty submission attempt by challenger James Gonzalez. The fight was forced to be stopped after 46 seconds due to the injury, crowning Gonzalez as the new CFFC feathering champion as the winner due to injury TKO.

Check out the video below courtesy of UFC Fight Pass.

“Arms are not supposed to bend that way”

This arm injury at CFFC is probably one of the nastiest injuries we have seen in MMA in a long time. Of course, we do see really gruesome injury finishes all the time in MMA due to the violent nature of the sport. But this particular one was especially nasty to watch due to the angle at which the arm bends.

Last year, there was a really bad arm injury in the Combate Americas organization when a fighter put his arm down during a slam attempt and broke it. That clip didn’t get as much play as this one at CFFC will because it wasn’t on Fight Pass, but they were equally as nasty to watch.

Many will also compare this injury TKO in CFFC to Frank Mir’s submission win over Pete Williams from all the way back at UFC 36 as the technique was similar. There’s also Mir’s famous arm-break submission win over Tim Sylvia at UFC 48 that some will compare this injury to. Basically, this was a really bad injury and hopefully Sabatini will be able to heal up quickly and get back into the steel cage as soon as possible.

Where do you rank this arm injury on the list of the worst all-time injuries you’ve ever seen in MMA?