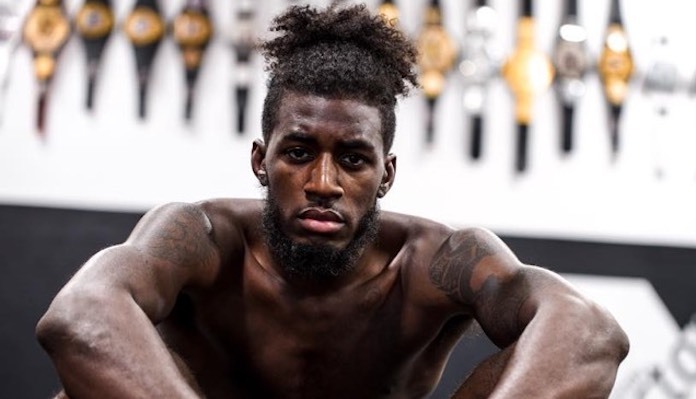 To say Devonte Smith’s 2019 was chaotic would be a bit of an understatement.

After starting the year off with a highlight reel first round KO win over Dong Hyun Ma at UFC 234 — in the first PPV prelim headliner in UFC history on ESPN — “King Kage” was on everyone’s radars. In fact, the 26-year-old lightweight standout would get matched up with a longtime UFC veteran in John Makdessi for UFC 241 in August.

That’s when the chaos began.

Less than three weeks before the bout, Makdessi withdrew with an injury and Clay Collard would get his second chance at fighting for the UFC. Days later, Collard would be forced out of the fight.

With around a week’s notice, Khama Worthy — a longtime friend and training partner — would get the call to face Smith in the UFC 241 PPV prelim headliner on ESPN. This time, Smith would be on the wrong end of a first round finish and Worthy would pick up what many considered to be the biggest upset of the year.

Add a serious injury and a surgery to that mix, there’s certainly a banner year of learning for one of the brightest prospects in the UFC’s lightweight division.

“A quick lesson with the ups and the downs,” Smith told BJPENN.com about his biggest takeaways of 2019. “It’s real quick how fast things can go left but I’ve been keeping a positive mentality. That’s the only thing I have to do to keep going.

“My achilles tendon tore and right now, they say it’s gonna take about five, six months before I can get back in [the Octagon].”

Heading into the UFC 241 bout with Worthy, Smith was riding a six-fight winning streak — finishing all of his opponents during the impressive run. It was clear that the Factory X product just wanted to keep the train moving regardless of who would ultimately end up being his opponent.

Once Worthy was the guy, it was admittedly quite strange for Smith.

“It threw me off a lot,” Smith explained. “I’m not taking anything away from him, he won, but it was more so like, dang! That was one thing I said, when I was an amateur, that I would never do is fight a friend because when I fight, I go to hurt. And to fight a friend, a former teammate, it’s hard. I thought I could handle it, truthfully, but it was a lot harder than I thought. Looking at the positive parts of it, I know that there’s no love in this sport. No matter who it is, when they sign that contract they’ve gotta get it and I feel like in some ways I had to go through that in case I get in there with another familiar face that I’m cool with.”

During the fight, both guys had a lot of respect for the other’s power and precision. It was clear that the two lightweight knockout artists had a history, even touching gloves in the middle of the round. The show of friendship drew some negative blowback, but it’s a mistake Smith likely won’t make again.

“I make jokes about it all the time: when we were going and we touched gloves in the middle of the fight, I paused in my head like, ‘why did I do that,'” Smith said. “It was so natural to do that. Then I hear his corner say, ‘he’s not your friend! He’s not your friend,’ and I was like, damn, we’re not friends. It was a really weird situation. It hurt, but you live and you learn. Shout out to Khama Worthy because about a week after [the fight], he sent me the most humblest message — to the point where I wanted to be mean to him but I couldn’t because he was so cool about the situation and gave me some motivating words. I’m happy for him and I can’t wait until he fights again.

“I could blame it on a million things but he won. He just won,” Smith continues. “My mind wasn’t where it needed to be and his was. I just learned the lesson and I got to keep on moving forward.”

Since suffering the torn achilles in November, Smith had successful surgery and has been recovering. With someone that has the energy levels and motivation to succeed like the Ohio-born Smith does, it’s hard to keep him down. Luckily, Smith has been able to use his time wisely by spending time with family, studying and watching a lot of fight film.

Of course, things could always be worse for Smith, but he has taken the negatives that 2019 has brought him and is turning them into positives as he looks towards a triumphant return to the Octagon.

“Yes, [I look at things differently], but I have no other choice,” Smith said. “I even got my nose broken. I’m experiencing all of these new lovely things in life. It can change so fast. I’m not saying I was at the top but I was climbing and it’s crazy to see how easy you can slip up. I’m just happy I got it out at the early side of my career, rather than late. I’m blessed.

“I’m just taking things slowly. I’ve got five to six months and that’s the first thing I need to do — heal and recover correctly, get back into the groove. I need to focus and win, and continuously win, and keep winning, then go from there.”

Devonte Smith is taking things one step at a time and is not rushing back sooner than he needs to. “King Cage” has a simple message for the fans, the media, supporters and haters, as well as the loaded UFC lightweight division.