Jake Paul could be headed to MMA sooner rather than later.

‘The Problem Child’ has been out of action since his rematch with Tyron Woodley last December. In that outing, Paul moved to 2-0 in the series with the former UFC champion. The YouTuber-turned-boxer scored a devastating sixth-round knockout, ending the feud.

Since that time, the 25-year-old has been marred by fight cancelations. Paul has seen both of his comeback bouts against Tommy Fury and Hasim Rahman Jr. canceled due to various reasons. He’s now finally set to return next month against Anderson Silva on Showtime pay-per-view.

The matchup against the former UFC middleweight champion is nothing new. In Paul’s boxing career thus far, he’s yet to face an established professional boxer. The 25-year-old has instead decided to face former MMA fighters, such as ‘The Chosen One’, and Ben Askren.

In addition to boxing former MMA stars, Jake Paul has teased that one day, he could fight in the octagon. Earlier this year, he was seen training leg kicks and received an invitation to train from American Kickboxing Academy coach Javier Mendez.

Now, on his podcast, the YouTuber has stated that his MMA debut could be coming sooner than expected. There, Paul teased that he has an announcement incoming with a major promotion. 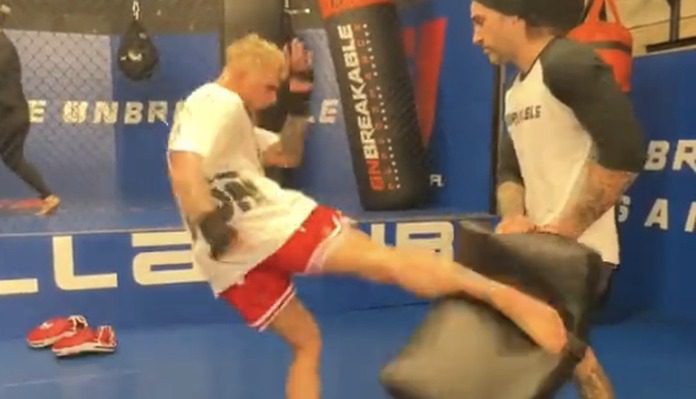 “I’ve got an announcement coming soon,” he stated on his BS w/ Jake Paul podcast. “I can just tease that, that I’m working with a big organization right now on a whole thing in MMA that also has to do with me fighting and we’re gonna have an announcement soon. I want to do it.” (h/t My MMA News)

Paul continued, “Javier Mendez said he would train me. So I’ll go to AKA (American Kickboxing Academy). I’ll probably need like a year, year and a half to get the kicks down. I already know jiu-jitsu … I wanna be able to do everything in there. At least checking kicks. I know how to wrestle already.”

Do you want to see Jake Paul fight in MMA? Sound off in the comment section below!

This article appeared first on BJPENN.COM
Previous articleJavier Mendez reveals Khabib Nurmagomedov never lost a sparring session, claims Islam Makhachev is the only person to win a round off him
Next articlePatricio Pitbull plotting move down to bantamweight to become champion at third weight class: “To take the legend step”
© Newspaper WordPress Theme by TagDiv