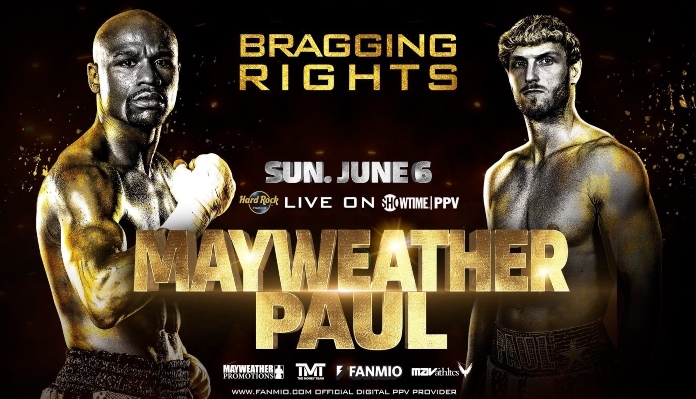 It’s happening. The previously teased exhibition match between Floyd Mayweather and Logan Paul is now official for the first week of June.

Tuesday, the legendary 50-0 boxing great in Mayweather revealed the new date and location for his upcoming match. On June 6 live from the home of the NFL’s Miami, Dolphins, it will be Mayweather vs. Paul in the Hard Rock Stadium – a venue with a capacity of 65,326. The event will be aired on Showtime.

“JUNE 6, 2021!!!! #MIAMI
Me and Logan Paul will be fighting at the Hardrock Stadium,” Mayweather said on Instagram.

“@mayweatherpromotions @fanmio and @showtimeboxing have come together to bring an epic Event!!! Tickets will be going on sale next week….”

The exhibition match was initially expected to take place in February but was postponed for undisclosed reasons. No more details ever emerged aside from pay-per-view prices and the like.

As of right now, the specific rules for the contest have yet to be revealed. If we’re to go off of the Paul brothers’ boxing careers to this point, the match will presumably be either six three-minute rounds at the minimum or eight at most.

Floyd Mayweather last competed in December 2018 when matched with Japanese kickboxing sensation Tenshin Nasukawa. The duo fought in a three-round boxing exhibition that saw the 126-pound RIZIN star suffer a first-round knockout loss. For the typically 150-pound Mayweather, he won’t have the size advantage this time around.

As the older Paul brother, the 26-year old Logan has only had one boxing bout to his brother Jake’s three. That being his YouTube star clash with KSI in November 2019. Unfortunately for Paul, he’d lose a split decision.

Upon original reports on the fight’s development, it was said that Mayweather can’t weigh any more than 160-pounds while Paul can’t weigh over 190-pounds. According to Fanmio via ESPN, additional details on the undercard of the event will be announced soon.