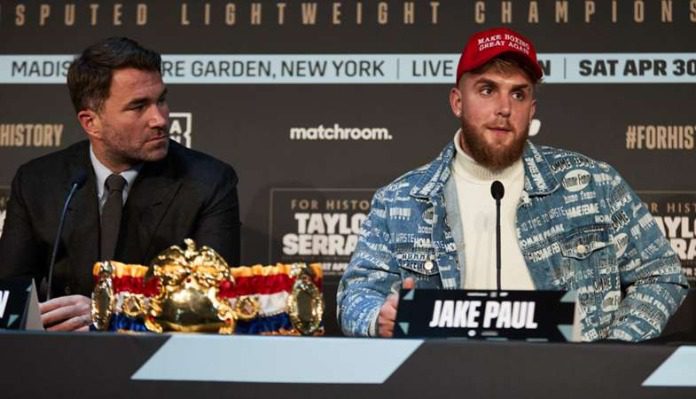 Eddie Hearn is looking forward to the day Jake Paul gets knocked out.

Hearn promoted Paul’s first pro fight and since then he has been critical of him. Eddie has claimed that the YouTuber is just an average boxer and that any undefeated fighter with fewer pro fights than Paul on his roster would beat him.

Although Paul has had some success, going 5-0 including knocking out Tyron Woodley his last time out, many have been critical about him not facing a real boxer. Yet, for Hearn, he says that will soon change as Paul will face Tommy Fury on August 13.

“I don’t represent them, but I hear that fight [Paul vs Fury] is happening August 13, so you might see it,” Hearn told Drive on talkSPORT. “Both are very limited, but as long as it’s a competitive fight, it doesn’t really matter.”

Paul and Fury were supposed to fight each other last December and just two weeks before the fight, the Brit was forced out due to an infection and injury. Woodley ended up stepping up and Paul won by vicious KO, and after the fight, Fury has been vocal in wanting the rematch and now it appears that will be the case.

Although Paul is undefeated, Eddie Hearn is not sold on his skillset. The promoter says it’s good for boxing what the YouTuber is doing but he is looking forward to him getting chinned.

“Jake Paul is a strange one, but I like what he’s doing for boxing. I did Amanda Serrano vs Katie Taylor with him and it was great fun, it was a big success. He’s putting the work in and he’s not terrible,” Hearn added. “But it’ll be a pleasant day when someone chins him.”

Whether or not Fury will be the one to chin Paul is uncertain, but all signs point to the fight happening on August 13.

Who do you think will win Jake Paul or Tommy Fury?