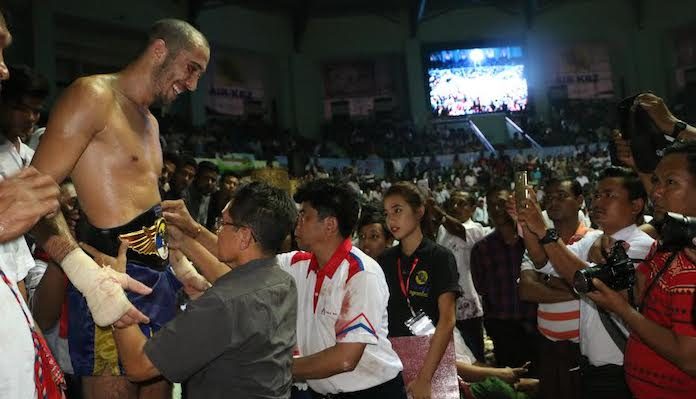 Dave Leduc is ‘the King of Lethwei’ and the biggest name in the sport. He holds multiple world titles, including the World Lethwei Championship Cruiserweight belt which he won by finishing UFC alumni Seth Baczynski in August 2019.

Because of the onset of the Covid-19 pandemic and the subsequent travel restrictions, he has been unable to compete since then. Now, he will make his highly-anticipated return to the ring.

I’m very excited to announce that I’ll be helping “The King of Lethwei” Dave Leduc write his autobiography.

Stay tuned for a book about Dave’s journey to the pinnacle of the world’s most violent sport. It’s going to be good 👊 pic.twitter.com/o57u65ZEto

On November 7th, he will embark on a rematch with Cyrus Washington at Sparta in Wyoming. Sparta made history back in September when they became the first promotion to bring Lethwei to the United States.

The sport originated centuries ago in Myanamar, and is considered one of the purest forms of striking in the world. There are no gloves, and headbutts are allowed. Under traditional Lethwei rules, you can only win via KO.

Leduc and Washington first went toe-to-toe in Yangon back in 2017. Despite Leduc getting the better of his opponent on the night, it was ruled a draw because both men were left standing after five rounds.

This upcoming show will provide an opportunity to settle the contest under traditional rules once more. Sparta’s inaugural Lethwei world title will also be on the line. The event will be streamed live on PPV, and will be the first time Leduc has fought Lethwei on US soil.

advertisement - continue reading below
‘My rematch with Cyrus Washington is probably the most important fight of my career. When we fought in 2017, he had over 100 fights, while I was still a young champion with 20 fights. He was bloody and running away from me the whole fight and I could have finished him but I didn’t know how to properly cut the ring. I dominated the rounds but it ended in a traditional draw. He’s been asking about a rematch ever since and I have been p*ssed about my performance ever since. This fight is for my legacy, Cyrus Washington is the only other fighter to have finished Tun Tun Min, so I need to finish him in a clear, decisive matter to solidify my status as best Non-Burmese Lethwei fighter of all time.’
The PPV will be available for $25 at www.spartase.com/ppv
This article appeared first on BJPENN.COM