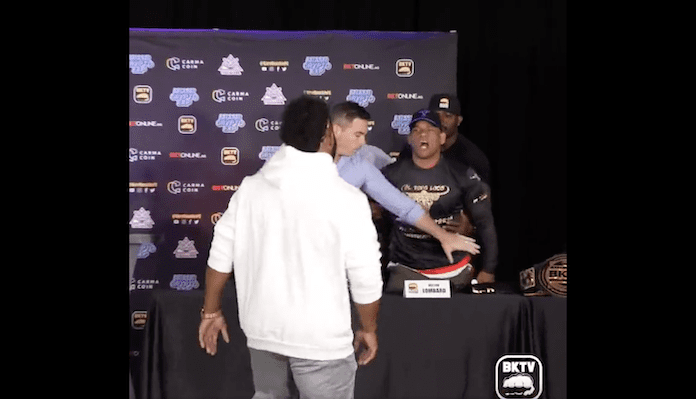 Former UFC fighter Hector Lombard, who is now a bare-knuckle boxer, and Lorenzo Hunt got into a shouting match at the BKFC 22 presser.

Hunt and Lombard are set to square off for Lombard’s BKFC cruiserweight belt this weekend when they meet Friday in the main event of BKFC 22 in Miami, Florida. Ahead of their grudge match, the press conference took place on Wednesday, and things got heated between the two rivals. At one point during the press conference, Hunt interrupted Lombard while he was answering questions from reporters, and then a shouting match ensued between the two rivals. That led to Hunt storming up to the table that Lombard was sitting at, flipping it over, and stealing his BKFC championship belt. You can then see Hunt taking the belt and slamming it on the ground before security moved him away.

Things go off the rails at the #BKFC22 press conference! pic.twitter.com/lO2dtdAyy0

Things go off the rails at the #BKFC22 press conference!

Pretty clearly there is no love lost between both Hunt and Lombard, who got into another altercation inside the ring several months ago. During that incident, it was Lombard who delivered a solid punch to Hunt after he stormed the BKFC ring following Lombard’s win over Joe Riggs. That set up this grudge match between the two for this weekend, though it looks like both men can’t wait that long to get their hands all over each other’s faces.

It will be interesting to see what happens in this match between the two bitter rivals. Lombard is a highly-experienced fighter who has fought all over the world for promotions such as the UFC and Bellator, while Hunt is one of the better fighters on the BKFC roster. With both men coming off of multi-win stretches in their BKFC careers, this should be an awesome matchup when it goes down this weekend in Miami.

Who do you think wins at BKFC 22, Hector Lombard or Lorenzo Hunt?