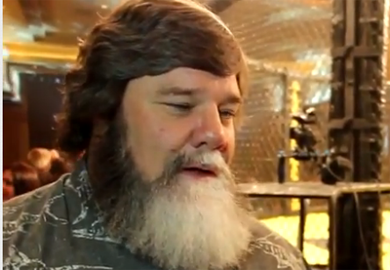 Aaron Tru from mmaprime.tv chats with NHB Legend Tank Abbott at King of the Cage. Tank was the commentated for the night, helping out with the KOTC broadcast. Tru asks Abbott about the difference between NHB and MMA. Tank talks about MMA being more of a sport, as NHB is what he is into; “you go in there..two guys enter and only one guy leaves.”

When asked about the current UFC Champions, Abbott said, “I hardly know who any of them are and that speaks volumes itself.”

When asked about his fight with Scott Ferrizo in the backyard last year, Abbott comments that, “Well that’s happened 100’s of times and usually their isn’t a camera there….there is no weight classes to hide behind, no rules to hide behind and no judges to hide behind…You better do good or you might being going home in a morgue wagon in a van.”

When asked about Tito Ortiz losses 7 of his last 8 fights to end his career, Tank comments, “Everyone got taken by a con man…and I think it’s funny that even for 10 seconds anyone thought he was tough..”

Tru mentions Frank Shamrock’s book during the interview, and Tank “doubts he wrote it himself.” Going on to say, “I’m sure it probably comes with pictures of crayon drawings..and maybe his first finger painting in there.”

When asked if he would ever train for a sanctioned fight again, Tank says, “I love to fight and that’s who makes me who I am…I am probably the closest thing you have ever seen to a true warrior.” “If someone has the right fight for me, I’m whiling to do it.”

The interview ends with Tru asking about UFC 6 and Ultimate Ultimate 98. The back story is that Tank made it to the finals of both UFC tournaments. However, there is a little bit on controversy, in regards to the semi final bouts in both tournaments. He faced Oleg Tarktarov in the finals of UFC 6 and Don Frye in the finals of Ultimate Ultimate 98; both men supposedly faced team mates/friends in the semi finals and were extremely fresh in the night’s final bout; while Abbott had extremely difficult bouts and was spent by the final match of the evening. Tank responds that, “Both of them fought their training partners, who winked and had very easy fights. It doesn’t take a rocket scientist to figure out that they fought their friends and that their friends laid down..not something that a true warrior would do. Like I said before, these guys aren’t true warriors…it’s not about winning or losing, it’s about the battle.”