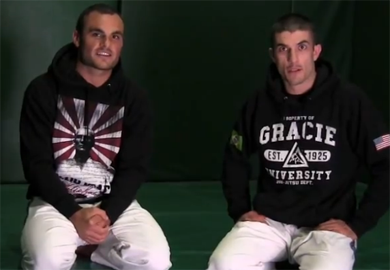 How he does it, no one really know, how he makes it look so easy, is even more of a mystery. In this episode of the Gracie Breakdown, Rener and Ralek analyze the keys to GSP’s success over Carlos Condit at UFC 154. They start by discussing the unparalleled timing and precision of GSP’s takedowns, and then they dissect the incredibly effective 3/4 guard passing strategy that GSP uses to plow past the guards of even the most seasoned grapplers. They also demonstrate the inverted knee-bar that Carlos attempted on three different occasions and they explain why GSP is so effective at neutralizing submissions from the guard. All in all, if you ever plan on fighting GSP, this is the most important Gracie Breakdown of your career!