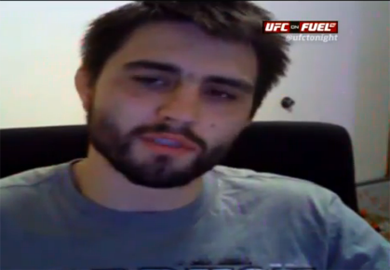 “Georges is such a dynamic fighter. He is an incredible athlete. He is a powerful, explosive guy. Between takedowns and strikes, there is a lot to deal with. I really feel like Georges is the undisputed champion. He has been so dominant in the division for the last several years, he has been undefeated and until someone defeats him, he is the champion.Yeah man, I think so. If someone in the cage, you can’t say ‘hey man that is off limits.’ There are no time outs, there are no substitutions. I wouldn’t say that I’ve been leg kicking any more or less than before.

“I’ve really made a point to work on my overall athletic ability. I’m really working hard on my strength and conditioning. I’ve filled in some holes in my game I knew I would need to fix before I fight Georges. I’ve trained with some of the best guys in the world on a daily basis, and it’s not a fight, but it’s pretty close. I’m really not too concerned. This fight is something I have been working toward for 10-12-15 years since I first started competing, and not even competing but training in mixed martial arts. This is a dream of mine. To fight GSP for the title in his home town for the undisputed belt is both surreal and an opportunity of a lifetime.”