Home » MMA News » Videos » Tate on Rousey: I want her to be scared after Satu... 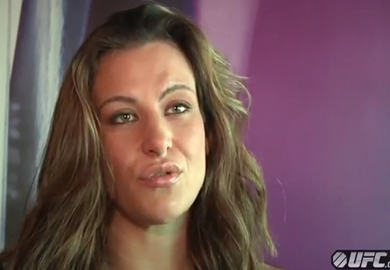 When fans think of WMMA the first fighter that comes to mind is usually Ronda Rousey.

However, before Ronda held Strikeforce gold, it was Miesha Tate who was on the tip of everyone’s tongue.

Now, just a few hours removed from her UFC debut, the former Strikeforce Queen, lets the UFC production crew know that she wants to impress and strike fear into the women who took her crown, Ronda Rousey.

“I want that impressive win, I want to make that bold statement, and I want Ronda to be scared when she watches me fight this Saturday,” said Tate in her UFC Fighter Diary. “I want her to know I’m coming for her.”

“I want Cat to feel like it was a mistake calling me out in the first place,” said Tate. “And I want to get my first win in the UFC.”

“Cat being overwhelmed before the fight even really starts and me having a mental edge over her is the reality that I believe is going to be true, because I know that this is a lot to take on. This is the first time she’s probably ever had to deal with so much, and it can be wearing if you’re not prepared for that.”