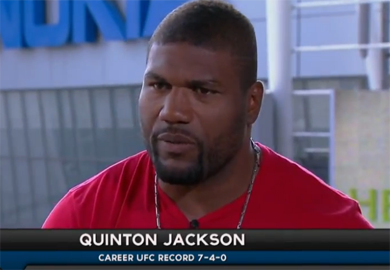 “His mouth gets his him fights. What’s his name? How do you say his name? ‘Chael?’ His mouth gets his ass in trouble. The dude is exciting for like two minutes, but then you just wanna turn down the volume, like, ‘What the hell you talkin’ about?’ He sounds like he practices his stuff in the mirror, and then he goes out and says it. He’s a great wrestler. That’s all I’m gonna say, ‘cuz everything else sucks. He can’t punch hard. Look what he did to Anderson Silva. He did a great job holding him down, making a boring fighter out of a decorated champion, for five rounds. After the fight, I see that Anderson Silva didn’t have a mark on him. Not a mark.”

“I talk trash, but I talk trash about people I’m actually gonna fight — people in my weight class. This guy, he talks trash about ring girls. He talks trash about the President. Now, that’s a little bit too much. He’s very disrespectful. I don’t like the guy. For real. The stuff he says about me. I like to joke around as much as anybody, but, for real, if I see Chael Sonnen, and he says anything to my face, I don’t know if I’m gonna smack him or not. I don’t know. I don’t like the guy.”

“Losing to a guy like Ryan Bader has lit a fire under my ass. I’m getting back in the gym and working on my new skills. My main focus is to destroy Glover Teixeira. It’s the last fight on my contract, and I’m gonna destroy Glover, then I’m gonna put my deuces up. There’s no love lost with the UFC. They’re a great company. They’re doing great things for the sport, but I just don’t think they’re doing great things for me.”

“Glover’s a tough guy. I like his fighting style. He’s a jiu jitsu guy, but he throws it. I respect fighters like him. I think the UFC and MMA needs more fighters like him. Fighters like Chael Sonnen are just ruining the sport, taking people down and just humping on them. Fighters like Glover can save MMA. I don’t understand why these guys are coming up with these elaborate game plans to win by decision. It’s like boxing.”